Agreement at top in Wisconsin 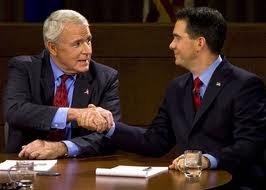 If you sift through the politics, there is agreement at the top of government in Wisconsin that the costs of public employee benefits need to be reined in. Both Milwaukee Mayor Tom Barrett and Gov. Scott Walker say so. Barrett, who was Walker’s opponent for governor in November, advocates a separate bill on bargaining rights for public employees, but he says Walker is on the right track in raising benefit contributions. His only amendment: police and firefighters should share the pain. He noted the high cost of retiree benefits for police officers, who can retire at age 43, and firefighters, who can retire at 49. Both unions endorsed Walker, so Barrett wanting their contributions as part of the budget repair package comes under the heading of payback. But there is fiscal reality to the mayor’s position as well. He has a tough budget to balance, especially with state share revenue cuts coming down. Walker gave the public safety unions a pass.