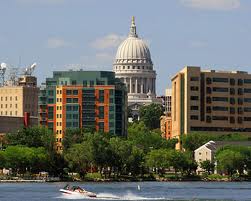 The weaknesses of adversarial models in our society become glaringly obvious in the meltdown of the Wisconsin political system. We have moved from the gridlock of recent decades to near paralysis.

Whatever happened to e pluribus unum (out of many, one) as an underlying principal of American political governance? The tenor of the times is now us versus them, without much give-and-take.

The coherent middle appears to have disappeared, even though independents make up a 40% bloc of voters who swing the election outcomes one way or the other.

The result is a generic lack of progress on major issues facing America, like the insolvency of Social Security and Medicare, the runaway costs of health care, the slipping performance of American students versus those in other countries, the stubbornly high unemployment rate and the dysfunction of our central cities.

The adversarial model failed in the American business world when unions and management spent an inordinate amount of company energies fighting each other. That was passable when the U.S. ruled the economic roost for several decades after World War II, but it doesn’t work in today’s competitive global markets. Result: American corporations, of necessity, developed one stratagem or another to get away from the union yoke. Today, only 6.9% of private sector workers belong to unions. In short, unions are largely an anachronism in the private sector.

Replacing the old models are collaborative ones. Lean disciplines, now the order of the day, in American manufacturing, rely heavily on problem solving by diverse groups of employees who put their heads together to find root causes and innovative fixes. Cars that last 200,000 miles are an outcome.

The same lean disciplines are now being deployed by teams of management and co-workers in health care. Errors, defects, waste, re-dos and infections are being eliminated in large numbers by health car providers who take such collaboration seriously. Health quality improves at such hospitals and clinics and prices drop.

On the other side of the ledger, our adversarial court systems are often ineffective. Dispositions of patent cases is not well served, for instance, by a pro and con argument in court. A panel of experts would do a better job of resolving issues involving intellectual property.

Handling of divorces got a lot better when the spouse-versus-spouse model was dropped and no-fault divorce was introduced.

Green Bay Packer and Pittsburg Steeler fans understand that an opposing team is necessary in order to have a game. There is mutual respect and collaboration so the game can be played. Chicago Bear and Philadelphia Eagle fans fail to understand the duality of the game, and get ugly with opposing teams and fans. The fun of sport gets lost when it gets truly adversarial.

One of the pillars of Wisconsin’s political and governmental effectiveness over the years was the concept of the Wisconsin Idea. In practice, it has meant pulling together the best minds in the state to come up with solutions to the most vexing issues of the day.

Bipartisan commissions, task forces, legislative councils that were cross-disciplinary and bipartisan in nature have advanced the state in subjects like export development, workforce readiness and school-to-work transitions, to name just a few. That effort to find enlightened consensus has generally moved the state’s governance and economy forward over its 162-year history.

Why not such an exercise for example, on health costs, the main budget buster at the state level? Neither party has laid a glove on the issue, even though major breakthroughs have been made in the private sector.

Instead, today we have wedge politics run amok. That divisive tactic for narrowly winning elections has been coarsened and hardened by the gusher of dollars flowing into opposing camps in politics. By definition, the tactics of Carl Rove destroy the coherent center.
Moderates can’t make it through the party primaries.

The big dollar contributors on both sides demand a return on their investments, and compromise becomes impossible for elected officials.

In the business world, diversity of thinking is an asset. Fresh insights can make for a winning business model. Group think is regarded as a to road business failure. Go-along boards of directors are a liability.

Similarly, in the scientific world, researchers play off one another’s ideas to come to new understandings of how things work.

Some issues in politics become so intractable that win-win solutions are not possible. It gets to win-lose, as in war time.

But wars are enormously costly and therefore should be launched only as an absolutely last resort.

Is a truce possible in Madison? Is political warfare the only route to solution at this late date? It doesn’t look good. The two parties have become incapable of significant compromise.

In future elections, it may take a third party that appeals to independents to move us past today’s political mine fields.