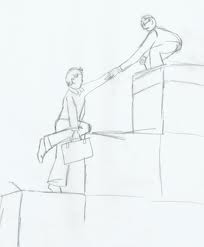 Mark was a pioneer when the state copied Germany’s famously successful program and launched a similar initiative in the early 1990s.  He was a junior in high school whose father had died the year before. He was in a tailspin and in danger of dropping out of school. His mother beseeched us to take him into Serigraph’s state pilot program in printing. We were reluctant, but said yes.

A month later, I was walking through the plant and there was this big kid working feverishly on one of our big lithographic presses. It was Mark. The long, scruffy hair and earrings were gone. He had lost weight and looked trim. He stuck out his hand to shake mine.

Mark raised his grades, as did most of the apprentices, graduated from high school, joined the Army and came back to help mentor graphic arts students when he got out of service.

The program works great for students, but it also works to develop an industrial work force.

As the economy crawls out of the swamp created by Wall Street’s moral abyss, manufacturing companies are on the cusp of hiring new employees, and they are coming up short.

Printers, for example, trooped to Wisconsin’s capital this week, where job creation is the marquee issue, to report that they had hundreds of job openings going unfilled.  They asked for help.  And state workforce leaders reminded them of their dormant youth apprenticeship program (YAP).

One printer said he had 15 openings and had virtually struck out in attracting qualified high school graduates who could read, write, do math and pass a drug test.

“It’s a 50-50 shot they can pass a drug test,” he said.  His company set a record recently was 13 candidates in a row who failed the firm’s drug test.

QuadGraphics, the nation’s second largest printer, which is based in prosperous Waukesha County, reportedly held three job fairs to fill 250 openings and came up with only 64 hires out of hundreds of applicants.

Joe Lyman, who heads Printing Industries of Wisconsin (PIW), cited a survey of graduating high school seniors in Waukesha County that showed 92% wanting to go on to college, 7% undecided and only 1% headed to the work force.

In a state where about 26% of the population holds a baccalaureate, clearly many of those with college intentions never make it to a sheepskin.  The irony in this mismatch is that printers make a lot more money than many college graduates and work in very clean, digitized plants – cleaner than most offices. The plants are temperature and humidity controlled, requirements for high-end printing.

Pay in prepress shops and press rooms exceeds $20 per hour for experienced operators, whether in union or non-union shops.  With overtime, annual compensation can hit six figures for veteran printers.

Kathy McCrary, who heads Youth Apprenticeship for Wisconsin, said having a trade association ready to do its part is “a dream come true.”

Printers, early movers on youth apprenticeship in the 1990s, saw excellent results.  Juniors and seniors in high school would spend their mornings in class taking required courses and their afternoons at the printing companies for paid on-the-job training.  Each had an experienced printer for a mentor. They made minimum wages.

Many of the young people got turned onto the world of imaging.  The 20 apprentices at Serigraph improved by an average of a full letter grade in school. The dropout rate from high school was zero.

The printing industry and other industries dropped the ball over the last decade as the economy see-sawed through the 2001 recession, 9/11, two wars and the Great Recession of 2008 and 2009.  Printers weren’t hiring, and they bailed out of the apprenticeships and the accompanying cost and effort. The program continued successfully in stable sectors like health care and finance.

Printing acknowledged they had done a poor job of selling their industry, often wrongly perceived as a “dead tree” declining sector.  Ditto for manufacturing in general, despite modern plants that are lean, clean and “high tech.”

A special complaint is high school guidance counselors, who printers see as steering far too many kids down expensive and dead-end college tracks. Ditto for many parents.

Many vocational-technical programs have gone away in high schools, often because of the cost of leading-edge equipment.  Therein lies the beauty of YAP offerings, because printing companies have that equipment.

The ball is largely in the court of printers and manufacturers to reinvest in youth apprenticeship programs.  The programs take real effort and resources by business and school districts, but they flat out work.

With an exposure to an adult work world and a viable career in sight, the students might even shuck the pot.