Madison Standoff — All About the Money 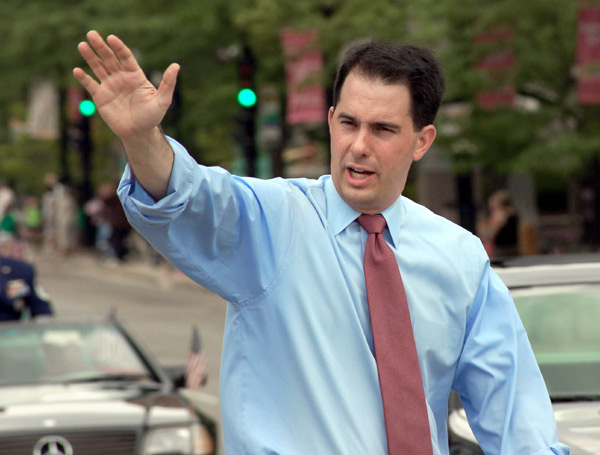 Way down deep in the standoff in Madison is a power struggle that has great import for the balance of power in American politics. Wisconsin Gov. Scott Walker is moving to turn off the free-flowing spigot of union dues to Democratic politicians.

Union membership fees not only pay the salaries of union officials. They provide a huge pot of money for funding the campaigns of friendly political candidates, almost always Democrats. For the Democratic Party and unions, it is a marriage made in the money temples.

Unions raise millions in dues, contribute millions to their political allies, who then in turn favor sweetheart compensation packages for public unions, which in turn allows for even more dues.  In a majority of races in Wisconsin, union contributions to campaigns at the state level out-weigh donations from the right.

Union members and leaders, of course, see those funds as necessary to offset the money-raising power of corporations, especially since the U.S. Supreme Court ruled that corporations could make unlimited contributions to affect the outcome of campaigns.

Gov. Walker was quoted as saying that this standoff is all about the money.  On the surface, he meant it is all about the 11 additional points he is trying to collect from state employee pay for their part of health care and pension costs.  More under-stated was a second message: it’s all about union dues going to support the Democratic Party.

The threat to that flow of funds is what caused Democratic state senators to flee to the neighboring state of Illinois, President Obama to weigh in on a state matter and the president of the national AFL-CIO to fly to Wisconsin to orchestrate the union response. All guns are on deck, on both sides.  The head of the national Tea Party was here, too.
Republicans in other states like Iowa and Indiana are making similar moves to stanch the flow of union dues to their opponents.

The threat to the flow of dues is obvious in the Walker’s budget repair bill.  In addition to the 11-point contribution, his bill calls for elimination of the requirement that all public employees in a local union pay dues and of payroll deduction for dues. In short, members of a bargaining unit could opt out of the dues requirement, which for state teachers can run $1000 or more per year.

Further, the Walker initiative requires to union to be recertified by a majority of members ever year. Union bargaining powers would be limited to wages.

The dues are the blood supply to the unions and Democratic Party, and Walker is trying to apply a tourniquet.  No such tourniquet would apply on the corporate side of the politics and money equation, so the life-threatening concern on the left is understandable.
Money more than ideas is the currency of today’s politics, so a political imbalance would result.

So much do the Democrats and unions care about their blood supply that they have already signaled to the governor that they will go along with the 11-point compensation hit if he will back off the changes to union rules.  That was hardly their position before Walker upped the stakes to include the clamps on union operations and fund flows.

There is another nasty reality at work in Madison. The state really is broke. And the state really is in a deep, long-standing economic crisis, worse than most citizens realize.
Here are a few of the more telling realities on how much damage has been done to the state’s prosperity and therefore its tax generating capacity:

Work has begun to reinvent the Wisconsin economy, but, until that happens, tax revenues will come up short.  In face of that downward trend, the spending in Madison continued as if the good times were still rolling. Gov. Doyle pumped every available dollar and more into education at the K-12 level and into expanding eligibility for state funded health care.

The former governor tapped every loose piece of change and used every financial angle to “balance” the budget. The truth is that it never really balanced over the last decade, if acceptable accounting procedures were used.

He and Gov. McCallum before him sold off the tobacco settlement billions for fast cash.
Result? Gov. Walker has few avenues for relief. He could raise taxes, but Doyle already did that, taking the top personal rate from 6.75% to 7.75% and installing combined reporting for corporations, a revenue raiser in the short run.

Unlike the unbalanced federal budget, where red ink stretches ahead farther than the eye can see, the state budget has to balance. The economy will recover some over the next two years, by most estimates, and that will help some with the next two-year budget that starts July 1. But there are few financial gimmicks left.

Further, the deficit is so large at a projected $3.6 billion that nibbling around the edges of the problem with minor cuts here and there won’t cut it. The governor and legislature have to deal with the big spending buckets, and that means salaries and wages of public employees. That’s where the big dollars lie.

Innovations could help, such as better managed health plans. Large private employers offer full health care benefits for one-half to one-third of what the state and local government payers dole out.

That item, for sure, has to be taken off the bargaining table. Half of the deficit could be erased with real health care reform, maybe all of it if Medicaid and Badger Care were included.

But state leaders have known that for years. They were just stuck in the old bargaining ruts. For better or worse, a confrontation of the scale we are seeing in Madison may be necessary to shake the state into better methods of delivering government. Grown-ups pay their way, and that’s what this is all about.

Lost in the noise in the state capitol is what the special session of the legislature was called for: job creation – fixing the state’s economy. That’s most unfortunate, because balancing the budget is only one piece of the puzzle.