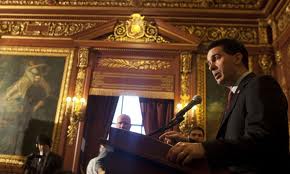 As Republicans and Democrats claim victory for the upward bounce in job growth over the last quarter, hard-nosed analysis still needs to be brought to bear on the relative economic malaise in the nation’s heartland.

Scott Walker of Wisconsin is ahead of schedule on his campaign promise to create 250,000 jobs in his four-year term. The state needs 5100 new jobs a month to hit that goal and has recorded 8000 monthly since Walker took office in January.  His positive attitude toward business may have helped.

Not surprisingly, President Obama is claiming that his free spending policies have “yanked” the economy to an up-tick in jobs, though it took two years for the stimulus to show results and unemployment rates remain high.

The truth is that American citizens and companies who strapped it up should get most of the credit for any rebound. It is also true that much work remains to reinvent the economy, especially in the Heartland where manufacturing will not come back to its former job totals.

The challenge remains, and we can’t afford to be running into box canyons.

For about the 30th time, I recently asked a knowledgeable audience in Wisconsin, “How many companies can you name that have been recruited into the state in the last 40 years?”  Not one of 25 people raised a hand.

It was a typical response.  Never have I gotten past the digits on one hand.  Case closed:  recruiting is not an effective economic development strategy for Wisconsin, or probably for any other state in the Heartland.

The cross-border subsidies are expensive, and even when they succeed, they constitute a zero-sum game.  One state wins, the other loses.  The nation and the Midwest region are no better off.

There are other forms of “old ED” on which we also spend tens, even hundreds, of millions of dollars.  One is real estate development, for which there is a variety of subsidies. Buildings don’t in and of themselves create jobs.  Construction jobs are created as the building goes up, but, once finished, the only permanent jobs are that of a janitor and leasing agent.

Real estate leaders agree.  They say:  “Get the economy going and the real estate sector will follow along.”

A third form of “old ED” is workforce training, on which billions is spent.  It’s of course, very important, but, again, in and of itself, doesn’t create jobs.

It belongs as a secondary strategy behind job creation.  Figure out what drives the economy and invest there first.  Let a vibrant economy pull workers through education institutions to open jobs instead of pushing them into blind alleys.

A fourth “old ED” program is to buy jobs with taxpayer money, as the Bush and Obama Administrations did as stopgap measures with trillions in federal stimulus dollars.

Existing public programs were maintained, roads got built, workers’ compensation was extended, banks and auto giants were bailed out, but it was hard to measure progress on permanent jobs in the private sector.

The stimulus funds were largely spent in non-strategic ways.  Most of the temporary jobs paid for stimulus programs were public sector jobs that used taxes. Private sector jobs generate tax revenues that pay for public jobs.

Finally, we spend billions of public and private dollars on what could be called poverty strategies.  Safety nets are necessary and humane.  But, again, they don’t produce wealth or job creation.

So, what would constitute a Prosperity Strategy?  What would “new ED” look like for a Republican or Democratic leader?

There are many elements, but they largely need to come together in a strategy for what Jeff Inmelt of GE called “the Innovation Economy.”

That means we need to embrace two resources that drive the economy in a positive direction:

In short, hug the big exporters at the top of the supply chain; they create a market for smaller other companies.  We need to make sure leading companies like GE Healthcare, NML, QuadGraphics, Georgia Pacific, MillerCoors and Epic are happy in Wisconsin.  They are the wealth creators and job maintainers.

And we need to surround entrepreneurs with support, encouragement and capital.  The nation’s young companies create all the net new jobs. Hug them, too.

Other businesses are important and necessary, but they don’t drive the economy.  The big exporters and dynamic entrepreneurs do.

Forget the wind at your backs on jobs over the last three months, Gov. Walker and President Obama, and take note of who should be hugged.