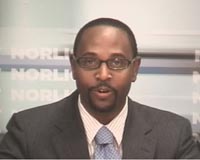 Give Reggie Newson credit for speeding up the release of hard numbers on Wisconsin job totals.

Newson, secretary of the Wisconsin Department of Workforce Development, has just issued the jobs totals from the census of the state’s employers as of March 31. The census of 96% of the state’s employers for unemployment insurance purposes are far better than the volatile numbers from monthly survey of 3% of the employers. The numbers themsleves were not so hot for the first quarter, an increase of 28,100 from a year earlier and far below the annual pace set by Gov. Walker of 62,500 more jobs per year or 250,000 over his four-year term.

But getting them a quarter earlier than they are released by the feds is a big step forward. If priority number one for the state is job creation, we have to have good, timely numbers. Waiting six months for the feds is unacceptable.

Next up: Newson should release the July 31 numbers forthwith. Companies in the state had to file the second quarter UI numbers by July 31. It’s mid-August. Add up the numbers (computers are good at that) and get them out. Public policy, election campaigns and business decisions hang on the job trends.

This entry was posted in Business and Government and tagged Reggie New. Bookmark the permalink.