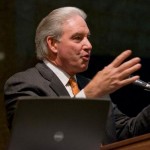 How about Tim Sullivan for the U.S. Senate from Wisconsin?

He is stepping aside from a highly successful run as CEO of Bucyrus International, capped off by a strategic merger with Caterpillar.

The instinctive reaction of pundits to the announced retirement of four-term Sen. Herb Kohl was to run out as possible candidates all the state’s politicians with a pulse: Neumann, Baldwin, Kind, Ryan, Falk, Barrett, Feingold, the Fitzgeralds, VanHollen. And Tommy’s name will come up, for sure. But no business people, with the exception of Neumann, who has a foot in both worlds.

That’s predictable, because the pundits are an extension of the political class. (Wonder why none of them every run.)

Take note that our two sitting senators are businessmen, both with enough wealth to fund their own campaigns. Indeed, that’s why Ron Johnson got the GOP nomination; he had more funds than his Republican opponents, so the party’s establishment got behind an unknown. Money speaks volumes in today’s political game.

Sullivan has money. His 2010 pay package was $6.3 million, and his 2011 package when the merger is complete will run somewhere between $29 million and $48 million.

Further, he brings to the table strengths that pure politicians lack. He is:

Sullivan would have the added charm of not being aligned with the far right wing of the Republican Party. He would have major appeal to independents, who are looking for problem solvers, not ideologues. The independent center makes up about 40% of the electorate, the swing bloc.

Sullivan could start off with a masterful political stroke. He could call for high marginal income tax rates on the nation’s fat cats. That would solve the nagging equity issue for corporate America of soaring executive pay. It would also deal with the multi-millions earned in Hollywood and in professional sports.  It would disarm  Democratic opponents, for whom taxing the rich solves all problems.

The message could be: “It’s America; make all the money you can make; but after a certain amount (say $2 million a year), you’re working mostly for the country; your marginal tax rate is 75%, but we’ll leave your income from investments that grow the economy at low rates. ”

And he could add: All those marginal taxes go to pay down the country’s unsupportable debt.

At 57, Sullivan has many options, including running another company. The headhunters will be on his doorstep. He is undoubtedly more suited to running an organization than being a member of the clubby U.S. Senate.

But his people skills and his expertise on some of the country’s major challenge would make him a winner there, too. And he would be making a higher contribution to the country.