The Wisconsin budget sausage, painful to watch being ground, is ready for the grill, and chief sausage maker, Gov. Scott Walker, is off to join the gaggle of Republican presidential wannabees.

He will battle other archconservatives to become the spear carrier for the right wing of the party, an arena so crowded that they could neutralize each other and create daylight for moderate voices. If you enjoy political hoopla, it is going to be more fun than a three-ring circus. 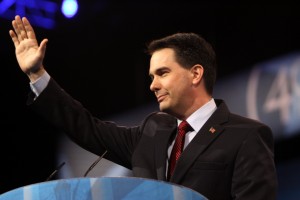 For the moment, Walker has one of the more daring high-wire acts. A gaffe at that altitude can result in a long fall. We won’t see much of the guv until the end of the primary season. He loves running for office; it’s his long suit.

Meanwhile, back in Wisconsin, citizens and leaders of state organizations are left to pick up the pieces and deal with the collateral damage from the budgetary bratwurst process.

As has become Walker modus operandi, much of what got done was politics by surprise, only minimally telegraphed during the gubernatorial and legislative campaigns last year.
Campaigns are supposed to educate the voters on what will come after inauguration. Not so much any more.

Budgets are supposed to deal with financial matters, but all manner of non-financial meat got thrown into the grinder. That will never change.

Let’s look at what got done and what didn’t in the budget making for the next two years.

Walker and the Republican legislative leaders did send the message loud and clear, smart or not so smart, that they weren’t going to raise taxes. In a narrow sense, that got done. But they are going to borrow a lot of money — $500 to $850 million – for transportation construction. That means taxes in future budgets.

Yes, total borrowing is lower than in previous budgets, but, in good times like theses, real fiscal conservatives should want to see debts repaid, not added to.

The gas tax could have been raised relatively painlessly when gasoline prices dropped sharply from more than $4 per gallon, but pragmatic politics lost out to ideological politics. Other states used the opportunity to find recurring funding for road building.

In one dimension, GOP leaders did lower taxes by getting rid of the alternative minimum tax that was poised to start slamming the middle class. But that reduction was paid for by postponing for two years the phase-out of the corporate income tax on manufacturers and agri-business. That was a good long-term trade-off, but it can’t be billed as a tax reduction over the next biennium.

The budget was severely strained because the GOP has ducked the biggest budget buster: health care cost escalation. The party has dragged its feet on pushing market disciplines and consumer incentives into the health plans for state employees and Medicaid recipients. Both are out of control.

Hundreds of millions of collars could be saved if the Republicans listened to business leaders who have contained the health cost inflation in their companies. There were some noises about going to self-insurance and consumer–driven plans for state employees, but that can got kicked down the road. You would think fiscal conservatives would want those savings for taxpayers, especially when state employees would enjoy a better health plan.

Medicaid is harder to get under control, because it requires joint action by state and federal governments. A Republican president who could give Medicaid bloc grants to the states to let them innovate like the private sector has innovated could solve that impasse.

Walker should run for president on that platform. Medicaid is busting the federal budget just like it is busting state budgets. Until politicos tackle the health cost issue (ObamaCare made it worse), future budgets at all levels of government will continue to face major deficits. As with the Walker budget, priorities like the university, K-12 education, environmental advances, economic development and even public safety and national defense will be crowded out.

The GOP also ducked a reform of the state’s Workers Compensation program, under which medical charges are three time the going rates in the private marketplace. Health care providers write big checks to politicians on both sides of the aisle, so hospital corporations veto any attempt to get to reasonable prices. If normal rates applied, Wisconsin business would save more than $200 million per year.

Re crowding out: two of Wisconsin’s greatest assets took some surprise hits. Anti-conservation Republicans listened to Sen. Tom Tiffany and tried to emasculate the Stewardship Fund and the Natural Resources Board. Hunters, anglers, bird watchers — nature lovers of all stripes — fought back, salvaged two-thirds of the 60-year-old bipartisan conservation program and kept the board’s oversight intact. Still, the GOP came off as heavy-handed on a range of air, water and land issues. Does the GOP read the polls on these issues?

The state’s other great asset, the University of Wisconsin System, was not so fortunate. It took another significant cut, $250 million over the biennium, the latest cut in a decade-long retreat from state support of our university system. The University of Wisconsin – Milwaukee will see the biggest whack to its budget, even though it is trying mightily to be a leader in reviving the lagging Milwaukee regional economy.

Obviously, the Republican and Democratic delegations in M7 region failed to get their act together to go to bat for UWM.

Across-the-board cuts are a blunt instrument, the crudest way to manage and to balance a budget. What should have happened under Walker was a strategic reorganization of the system, an exercise that hasn’t happened for more than four decades. A high level strategic commission needs to sort out the university’s place and role in a much-changed global economy. Chancellors and deans on the 26 campuses are trying to align with regional economic development initiatives, but more strategic clarity is needed from the top, from the state’s political leaders and the UW Regents.

The university could help itself with more transparency in its financial reporting. Beyond reserves, there is a lot of off-balance sheet money floating around in Madison in foundations and UW Health. A pending system-wide audit will help.

School choice moved forward, which many parents want. Choice has the virtue of being far less costly on a per student basis, so it is a plus for taxpayers. Public schools, another great asset, need to right size for the student numbers that they retain. For-profit and non-profit organizations do it all the time.

The proposal for state funding for a new arena for the Milwaukee Bucks hit a wall of out-state opposition and suffered also from a lack of bipartisan commitment in the M7 delegation. Perhaps a referendum in the seven M7 counties could be a way forward. The Green Bay Packers used that approach.

Two other complete surprises, never mentioned in campaigns, were slipped into the GOP budget: a rewrite of “The Wisconsin Idea,” the UW mission statement , and an assault on open government. Both raised a ruckus across the state and were summarily withdrawn.

Though a non-budget item, the Republicans did fashion a compromise to eliminate “prevailing (union level) wages” for local capital projects. That will help municipalities, school districts and technical colleges a lot.

Summing up, it is hard to assess in a strategic sense whether the 2015-2017 state budget moves the state forward or backward.

Citizens did learn one lesson: listen with one ear only when political candidates put out their platforms. Government by sucker punch once in office has become the new normal.