George H. W. Bush was born a gold-plated patrician, and he lost his re-election in 1992 partly because many voters thought he was out of touch with the people. But he was one of the most regular, down-to-earth guys you could ever meet. 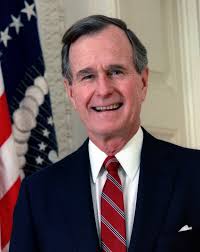 I was lucky to have a Congressional Fellowship in 1969, right after Richard Nixon was elected president, and had the opportunity to interact with then-Congressman Bush. Eight journalists were there to get an inside look on how Congress works and become better reporters and editors. Rep. Bush volunteered to spend a couple of hours with us to give his version of the workings of the institution.

He came into the meeting, greeted us with a warm smile, took off his blue blazer, loosened his tie, sat in a big lounge chair, put his feet on the table and made himself wide open to every question we wanted to ask. He liked the press. He was light-hearted, funny and had a twinkle in his eye when he answered our queries.

I made the decision to not work directly for him, picking Rep. Donald Rumsfeld of Illinois instead. They were allies in putting a new guard in charge in the house and succeeded in promoting Gerald Ford to the Speaker position. Rep. Bill Steiger (R-Oshkosh) was part of the group. Those moves would be their springboard later to White House positions.

During my year in D.C., I worked with H.W. and his staff on several important issues, like the creation of an all-volunteer army and changing the seniority rules on house committee leadership. He was accessible, never a big shot.

I loved that about him, because he was a helluva guy and could havbe been arrogant. He had a sterling track record that will seldom be matched. War hero at 20, top of his class at Yale, baseball team captain, wildcat oil entrepreneur in Texas right out of college. He was the real deal and still a modest man.

One of his friends labeled him the best one-term president in the history of the country. There is substance to that statement: Consider these hallmarks of his four years in office:

• He finished what his predecessor Ronald Reagan started: an end to the cold war. He talked one-on-one many times with heads of state, like Gorbachev, to orchestrate the wind-down.

• He understood modern warfare and limited conflicts. When there is a grievous transgression against our interests, like Sadam invading Kuwait in 1990, you go in hard and heavy, you destroy the enemy’s capacity, you win, and then you get out. You don’t try to do nation building in parts of the world where it is nigh impossible. (His son forgot that lesson in 2003.) H.W. used the same get-in, get-out strategy in Panama in 1989.

• Unlike Republicans of today, he cherished the nation’s natural resources. He improved the Clean Air Act goals, but gave industry the flexibility to meet the tougher anti-smog standards. Using Teddy Roosevelt as a model, his was a “green and gold” philosophy with the environment and business moving forward together.

• He was open to the people via the press. He held frequent press conferences. He seldom misspoke.

• He signed the Americans with Disabilities Act to ban discrimination against disadvantaged people. He was surely thinking of his wounded war buddies as part of the deal.

• He knew the people of this country had more to do with its success than the political leaders who come and go. He coined the term “1000 points of light” to describe the voluntary contributions, millions of times over, by ordinary citizens who have made this a wonderful, though imperfect country.

That elegant piece of word-smithing was out of character. He confessed to being inarticulate with “the vision thing.” He needed a better speech writer.
That language deficit may have cost him his re-election to a second term, which he deserved.

Adding up the positives and negatives of his career, don’t you wish a leader of his cut were running in 2020?