Observations on the current state of affairs in Wisconsin:

Walker Presidential Campaign RIP – It’s time for Gov. Walker to come home and tend to the affairs in Wisconsin.

He said before being elected for his second term that his performance in Wisconsin would set the course for his presidential ambitions. 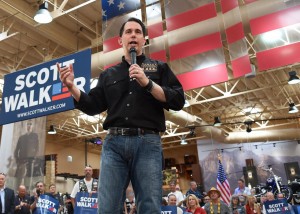 The state’s economy is doing marginally better, but relative to other states it’s still in the bottom two quintiles for job growth and wage levels. There’s lots of work to do at home.

Walker’s slide in the polls to near obscurity is irreversible, and his scripted, lackluster performance in the GOP debates offers no optimistic upside. He may not make the cut for future debates.

His surprising shot to the top ranks of the GOP primary polls was followed by an equally sharp drop-off. Momentum is paramount in politics, and our governor has lost the Big Mo.
He won’t come close to winning in Iowa, his most fallow ground. And that means he won’t be in the vice presidential discussion. Besides, the number two spot on the presidential ticket will probably be a diversity choice, which doesn’t work for a middle-aged, slightly balding, white guy from a state with a small electoral vote.

Our governor lives to run for higher office, but he’s a relatively young man. There will be other years and other campaigns, but only if he does an outstanding job in Wisconsin.

New State Venture Fund – Note that the just launched Badger Fund of Funds — $25 million in taxpayer money and $8 million in matching private funds – intends to make no investments in the Milwaukee area. (Disclosure: I help run an early stage fund in M7 region.)

The beat goes on. Funds generally go in one direction from the M7 Region – to not from Dane County.

University of Wisconsin Cuts – The hiring freezes, layoffs, early retirements and terminations are in full swing at the state’s 26 campuses.

Those reductions could all be avoided if Gov. Walker, GOP legislative leaders and university chancellors and deans would depart from one piece of the status quo.

Instead of buying health care through a sclerotic state agency, just turn the 26 chancellors and deans loose to purchase health care at the local level.

Private companies have used a new model to deliver care, and their plans could be replicated. Medical providers would surely cut direct deals. The savings would be more than enough to offset the GOP cuts to the university. And, importantly, state employees would be better off with the innovative health plans.

The longtime pattern has been for Milwaukee Democratic voters to elect Dane County governors, and then get little payoff.

The M7 region should have plenty of political clout. The seven counties have about 40% of the legislative seats. But the M7 delegation seldom gets its act together.
Democrats from Milwaukee County and Republicans from the surrounding counties have hard time working together. They cohered on the Milwaukee Bucks arena, but not much else.

Madison Democrats, who do close ranks, exploit that M7 split and get more than their fair share of state government goodies.
Because the M7 delegation punches under its weight in the capitol, Milwaukee lags.

Most would agree that a lagging Milwaukee is not good for the state as a whole.