What the GOP ‘debates’ didn’t address

The three-hour “debate” lent itself to scripted sound bites, pre-cooked repartee, over-talking of opponents and narrator and blurts for a grab at air time.

Despite all that, the entertainment value was high (I talked to many people who, like me, watched the whole thing) and there were revealing insights on how the candidates would deal with the issues that were raised. For political junkies and even voters, the 2016 GOP contest is shaping up as the most lively and fun campaign in decades.

In comparison, the Democratic preliminaries are downright boring.

By the very nature of the televised exchanges, where time for answers is short to the point of inanity, candidates are limited to headlines only. Some have white papers to underpin their responses.

Abortion (Planned Parenthood), immigration (a foolproof wall), and the Iran Nuclear Pact (tear it up day one), got lots of airtime and were common denominators. But what about these other overriding political questions that beg solutions: 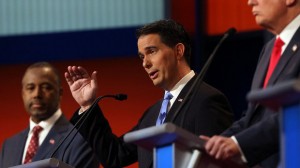 Health Care Costs – Opposing ObamaCare was a common refrain. How did that work out for Mitt Romney? Opposition is not proposition. Gov. Walker, who rode his Harley home after a second fatal showing, at least concocted plan. It was a wild pitch, a half-baked plan that would cover everyone with age-rated tax credits. It got no traction.

None of the gang of 16 has wholeheartedly adopted the market and consumer-based plans that are cutting costs sharply in the private sector – a natural Republican position.

Note: A grassroots revolution in the private sector is harnessing the unsustainable costs, and Health Savings Accounts created in 2003 by Republicans engendered it. Innovative company plans lower costs sharply by improving the health of their work forces.

It’s a win all the way around, for either party. Do these GOP candidates listen? Do they go outside? Do they learn? Do they know the main issue is the costs?

In the vacuum caused by ideology and blanket opposition to President Obama, health costs in the public sector continue to crowd out national priorities like defense, education, environmental advances, border control and adequate policing in our central cities.

The Lagging Economy – Do none of these competent, intelligent candidates not know that entrepreneurs are the best bet, and maybe only effective bet, for reinvigorating the economy?
Have you read recent headlines about large corporations cutting back their work forces? Those stories are unending.

Jeb Bush and a few others have tax plans to get back to 4% growth, but it won’t happen unless every major institution in our society –- universities, technical colleges, schools, foundations, all levels of government, major corporations – get behind innovative ventures.

Entrepreneurs don’t care about Tea Prairies and taxes, at least until they get to an exit.

Yes, Mr. Trump, hedge fund mangers should pay ordinary income taxes on their profits. They add little real value toward national prosperity. But, Mr. Capitalist, what about incentives for raising more capital for entrepreneurs who take great risks to get an enterprise going? They are the job creators.

Going to War – With the exception of Sen. Rand Paul, who reminded us all that the Vietnam and 2003 Iraq wars backfired for the United States, the Republican candidates struck hard-line postures.

Their calls, articulated best by Carly Fiorina, for a reversal of the Obama military wind-down and a strong military will sell to most citizens. This is a dangerous world, resulting in a complicated game of international politics. It is good to have the aces in your hand when dealing with the bad guys.

But I remember being sickened the long stream of obituaries of young soldiers and marines coming out of the wars in Afghanistan and Iraq, and the mortalities and grievous injuries continued long after the major battles had been fought.

We need to be smarter about engaging and disengaging from those conflicts, and I didn’t hear the debaters say so, except for Paul.

The Environment – The Great Lakes are under attack, including a dead zone in Green Bay and fouling of the drinking water supply in Lake Erie. Water scarcity is THE ISSUE on the West Coast.

Republicans led on the Clean and Clean Water Acts a generation ago. Those laws have worked. The benefits have far out-weighed the costs.

Remember Teddy the conservationist? He was a Republican. Where are his potential successors on that fundamental set of challenges and issues today? Why are they not on the front burner?

Melt-down of Central Cities – How can the moderators not bring up the enormous challenges to many of our central cities?

Gov. Pataki has come up with one innovative idea: to use universities as hubs for rejuvenation of their job bases. Why not others? Where has Walker been on the challenges in Milwaukee?

Urban solutions have to start with job creation and poverty, but they have to include fresh approaches to the high birth rates to single mothers, crime and educational attainment gaps. Where’s that dialogue?

Medicaid will have to be turned over to the states in bloc grants for innovative solutions. It can’t be managed at two levels of government, state and federal, each stalemating the other. It’s two chefs in the kitchen.

Americans are living to 80, and society can’t carry us elders for 15 to 20 years. We are all going to have work longer in our lives, as is already happening.

That necessity has to be talked about. If not in a presidential campaign, then when?

Income, Wealth Inequality – This will be the Democrats main issue in 2016. For Republicans, isn’t a good offense the best defense?

Among the solutions they could talk to: profit sharing; expansion of 401k and HSA tax benefits; employee ownership; tax reform, including higher rates for the super rich; and minimum taxes for corporations, especially the large ones that pay low or no taxes.

Wages have finally started to tick up in the last two quarters as the recovery broadens and deepens. The GOP front men should take note that ships are rising.

Instead of snarky ripostes and reality TV entertainment, the journalists — assuming they are serious journalists – should address the politicians with the big questions that are not on the campaign scripts.

Fortunately, the debates have just begun. We witnessed Round Two of a 15-round match. Let’s get to the meat in the remaining rounds.