All Americans can at least agree on one dimension of President Trump’ recent history: he knows how to command center stage.

The headlines of late have been all Trump, all day, every day. His debate awfulness, intentionally or not, blew the New York Times revelations on his tax avoidance and massive business losses off front page. (His tax returns were the unchallenged source; fake news rebuttals don’t fly.)

Now, unintentionally but sensationally, his self-inflicted COVID 19 infection has blown his debate debacle off front page.

Many previous presidents worried about over-exposure. They spaced their appearances and speeches so they were noteworthy and therefore had policy and leadership impact. They avoided wearing out their audiences, the American people.

Not so President Trump. He recognized that social media chatter never goes away. He mastered this new communication tool to dominate the news.

One result of the over-communication has been chaos. The chaotic Tuesday debate turned the presidential campaign into a semblance of professional wrestling, a fake contest.

Little of substance in terms of major national policy was advanced. Yet last Tuesday’s debate did yield one useful result; for better or worse, it revealed the temperament and character of the two candidates. 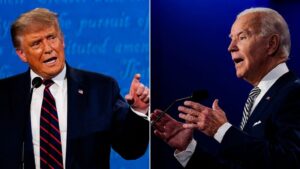 There was a broad consensus afterward that Trump is a not a civil man, that he is a world-class bully. That’s been the most common word Americans have used to describe his debate tactics. Biden came off as inarticulate.

The response from the Forever-Trumpers is that Joe Biden also hit below the belt. Okay, but how do you deal with a master of insults, unsubstantiated accusations and bluster? How would you debate him? Biden had to hit back.

A debater against Trump comes off as soft if he tries to take the high road and stick to a positive message in the face of a barrage of bombastic, never-ending attacks. Biden could have looked not equal to the challenge of a tough debate.

Even hard-nosed journalist Chris Wallace looked weak as moderator and could not control the debate as Trump over-talked and ignored his attempts at decorum and playing by the rules.

It really wasn’t a debate. It was something else. A shouting match? A no-win match with a skunk?

Whatever you call it, there was no individual winner. Only losers. Trump lost a point or two among the small slice of remaining undecided voters. The early-on polls show Trump lost ground. Biden’s lead in a national poll now stands at an almost insurmountable 14 points.

The biggest loser in the verbal brawl was the United States or America. The melee debased what this country stands for: tough but fair dialog.

There were lots of citizens who turned off the debate after ten to 15 minutes. There we many others who decided not to watch the two subsequent “debates.” David Brooks contends that Trump may have destroyed the tradition of presidential debates forever.

Trump’s COVID 19 infection probably rules them out anyway, a blessing in a nasty disguise. Let’s hope he recovers quickly. He is our president. But let’s hope also that there are no more un-American presidential debates before the Nov. 3 election.

Nor should there be any talk of a postponed election. President Trump invited his illness with his callous disregard for virus prevention.  His escape from the hospital to take a bow from a small crowd is point in case. Let the reality show conclude on November 3.