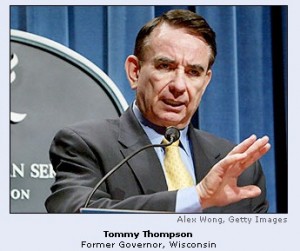 Tommy Thompson knows that timing is everything in politics, which is why he has been so coy in recent years about running for higher office again. This time around, he’s running, and his timing looks impeccable.
The nation and the state swung left in 2008 to President Obama, and then the electorate ricocheted right in 2010. In 2011, few voters are happy with the unemployment rate, the national debt and deficit, the polarization or the general direction of the country.
The electorate, especially the huge block of independents in the middle, will be looking for a candidate for the Wisconsin senate seat who offers pragmatism, the ability to pull people together again and leadership. Tommy can claim that ground.
His three opponents in the GOP primary look to be State Sen. Frank Lasee, former U.S. Rep Mark Neumann and Assembly Speaker Jeff Fitzgerald, all of whom are far right of center. Those three will split the right wing vote in the primary, and Tommy should run right up the middle to daylight.
Then his Democratic opponent looks to be Rep. Tammy Baldwin of Dane Country, one of the most liberal members of the House. Tommy may not be the most palatable candidate to the tea party wing of the GOP, but he’ll be a no brainer for them compared to Tammy.
Our former four-term governor has been exceptionally quiet so far, except to fight back on the quality of fiscal and tax-cutting credentials. He doesn’t need to make a lot of noise. The political winds are blowing smartly for a more moderate candidate.
It should be smooth sailing for the guy from Elroy.