Future of Act 10 at stake in court race 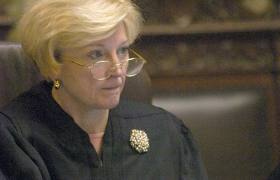 So far, the battle for a pivotal seat on the Wisconsin Supreme Court has been pretty tame, but it won’t stay that way. There’s too much at stake, including the future of historic Act 10, for this spring’s election campaign not to get expensive and partisan.

It may stay low key for the next month through the Feb. 19 three-way primary, but the two-way general election April 2 promises to have some of the same fireworks that have marked the last three high court slugfests in Wisconsin.

At stake is the majority on the seven-justice court. Incumbent Patience Roggensack, a key figure in the 4-3 conservative majority, is being challenged by two candidates who have given every indication that they would be part of a liberal majority. Some term the present minority as “activist.”

Challenger Vince Megna, who has established himself as a “lemon law” lawyer, is an avowed supporter of the Democratic Party, even though high court positions are supposed to be non-partisan. While it is unusual for candidates to take positions on pending decisions, he has expressed opposition to the Voter ID law being pushed by Republicans.

And he has stated publicly that he thought the majority opinion that upheld the Act 10, which stripped public unions of some bargaining powers, was wrong. Roggensack was the lead author of that unsigned opinion.

Challenger Ed Fallone, an associate professor of law at Marquette, has been less direct about his positions, but has expressed reservations about Act 10 and has reportedly contributed to Democratic candidates.

Two of the three candidates will emerge from the primary in a month, and then the political high rollers will get into the game big time. Roggensack figures to make it through the primary, as she will garner most of the votes from right of center. Megna and Fallone will split the votes from left of center. Either would almost certainly tip the balance on the court.

The last Supreme Court race between conservative incumbent David Prosser and liberal JoAnn Kloppenburg in 2011 cost more than $6 million. Prosser prevailed. The two races before that, Gableman vs. Butler in 2008 and Ziegler vs. Clifford in 2007, were also multi-million adventeures. All three were nasty campaigns. In both cases, the conservatives, Gableman and Ziegler, won.

The 2007 campaign by Linda Clifford against West Bend’s Annette Ziegler was marked by Clifford’s cheap shots. Her opposition researchers spend days in the Washington County courthouse going through every piece of paper Ziegler’s district court every touched. They came up with nothing but nickel-dime stuff, but sensationalized it any way.

On the other side, Gableman distorted to some degree the record of Justice Butler in a criminal case in the 2008 election.

The 2013 race will certainly run into the millions. Both sides are tapping election weary supporters to raise big money. The bulk of the money goes for TV and radio ads, and they seldom illuminate the issues. Expect their sound bites to go very negative, very quickly.

Roggensack is the only one with a judicial track record. She served on the Wisconsin Appeals Court before winning her current seat in 2003. She says justices should follow the law, not make it. She doesn’t think a majority of four on the court, which gets limited input on public policy, should take the place of the legislature, which gets all manner of input.

In legal parlance, she is a strict constructionist. Statements by Megna and Fallone indicate more of a willingness to assert the high court into policy making.

In another dimension, Roggensack can be viewed as business friendly. She, for example, authored the majority decisions that protected the standing of bank letters of credit in business melt-downs and the right of employers to conduct testing of drivers before reinstatement.

Fallone has raised the issue of the court’s dysfunction, which revolves around the testy relationships between Justice Prosser and Chief Justice Abrahamson and Justice Ann Walsh Bradley, an Abrahamson ally. Fallone talks of the need for a new chemistry.

There is no question that the spats between the three justices are unbecoming and detrimental to the dignity of the court.

But Roggensack has an apt response. If there is a dust-up in the Packer locker room, should Aaron Rogers be fired, she asks. She asserts that her conduct has been appropriate as a justice, and no one contends otherwise.

Even though the coming campaign will undoubtedly see more sound and fury than substance, voters will have a clear and important choice on whether the court should keep its conservative bent or go activist.