How would you like to be a Republican congressman and have to defend attempts to engage foreign governments in American presidential politics of 2020?

How would like to have to defend soaring federal deficits and record levels of national debt?

How would you support an esclating set of trade wars that have so far not made a significant dent in the U.S. trade deficit?

How would you refute the critics Trump foreign policy, such as the just announced pullout from Syria or the continued strikeout on reducing the belligerence from North Korea? 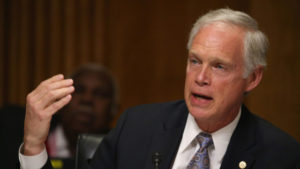 That’s the predicament Wisconsin Sen. Ron Johnson and the state’s four Republican congressmen find themselves in as facts emerge about President Trump’s pressure on the Ukrainian president to investigate the Bidens, father and son.

President Trump doubled down on that issue with a request of the Chinse to wade into opposition research to help his campaign. It is his way of asserting that it’s perfectly OK to ask for election help from foreign leaders. Most Americans won’t buy that claim.

Sen. Johnson became unglued when he attacked the “leakers” of the Ukraine whistleblower report and when he tried to defend President Trump’s solicitation of foreign help on U.S. campaign matters on Meet the Press.

The senator, a Trump loyalist, was in an impossible position. The president has dragged Johnson and all GOP congressmen into a swamp. There are simply no good answers to some of the issues the president has created. Sen. Johnson said repeatedly that he was just seeking “the truth” when he defended the president’s requests of foreign governments.

He will not find “the truth” through those channels. Foreign leaders will release information that serves their purposes. It will always have a spin.

Sen. Johnson said he does not trust the FBI or CIA to ferret what real or not in the multiplying conspiracy theories surrounding our presidential elections.

The questions then arise: Where will the senator find the truth? Who does he trust?

In the end, the American people will have to determine for themselves what’s real and what’s not. To that end, the whistle blowers and leakers are serving the American people. How else are we going to get to the heart of the political narratives? The politicians will reveal only what they want to reveal.

Recent polls show that the American people want more “truth” on the president’s entreaties of foreign governments for election purposes. By a margin of 58% to 38%, the respondents to a Washington Post-Schar School poll support the House Democrats’ impeachment inquiry.

The plight of Republican senators and representatives is compounded in Wisconsin. Polls that show voters swinging sharply against re-election of the president in 2020. The top three Democratic challengers all top Trump: Joe Biden by 9 points, Bernie Sanders by 5 and Elizabeth Warren by 4.

The latest Marquette polls, which are highly regarded, showed similar trends. The president’s ratings are dropping, even though he stirs the pot with new pieces of controversial policy on an almost daily basis.

Do the Wisconsin representatives want to ride on the president’s coat tails, or do they want to be at arms length? Is he winner or a loser?

In addition to their personal careers and control of Congress there’s a lot at stake. Wisconsin is a swing state whose ten electoral votes were critical to the Trump win in 2016.
The poll results are telling us that American voters are trying to sort out the charges and countercharges that emanate from the president’s Twitter warfare

I don’t know about you, but I get up in the morning, read the sports page and then look to the main news section to see what kind of bombshell President Trump dropped in the last 12 hours. There’s almost always something new to sir the political pot.

I’m getting campaign fatigue, and the election is still 13 months away. Even for a political junkie, it’s not fun anymore. I can’t tell who’s on first, second or third.

One rock-solid conclusion from the political reality show is that the Republican Party is in an implosion. Fractures are everywhere. The Trump dynamics have already driven three Wisconsin Republicans to leave the House of Representatives.

Given the kind of stress Sen Johnson has had to endure in recent weeks and months, there will probably be more GOP defectors. I feel sorry for the good guys in Congress, and there are a lot of them. They didn’t sign up for these theatrics.