The Trump Administration has the right instincts in pushing for legislation to force the Medical Industrial Complex (MIC) to come clean with its prices. But they need to do it right.

And it won’t be an easy fight. The MIC will fight ferociously to keep the current inscrutable pricing structure. Why wouldn’t it? They love pricing in a fog. They are grabbing an ever-increasing share of the U.S. economy – pushing toward 20%. The major insurers and providers are making buckets of money, even as non-profit corporations.

The push for transparent pricing has been around for a couple decades but has made little major headway. Yet there are pockets of reform in the private sector that show promise.

The first thing private sector payers have discovered is that list prices mean next to nothing. The discounts have varied widely. It continues today.

A recent biopsy at Serigraph carried a list price of $6956. After the discounts for the insurer, the net price was $3749. How do you explain a discount of 46%?

The second thing payers discovered was that net prices (real prices) varied as much as 400% in a market and even within a single hospital system from hospital to hospital.

In other sectors of the economy, contracts are won and lost for a couple of percentage points. Four-hundred points is economic chaos. Health care has been and remains a non-market.

The Trump administrators need to understand that their legislation cannot stop at sticker prices. They need to get at real prices.

Some private employers have retained entrepreneurial companies that cut through the fog and shine a light on end prices for a whole episode of care. As an example, several specialty hospitals offer a fixed price of about $28,600 for a joint replacement. Prices in the Milwaukee hospital corporations can range as high as $95,000. The median is around $50,000.

Further, there is a warranty. There is no charge if something goes wrong and there is a re-admission for a re-do.

Colonoscopies can be purchased for $2,380 in a bundled price, while the non-market prices range between $3,000 and $10,000, depending often on the number of polyps removed.

The established players in the lucrative health care industry will defend their chaotic, exorbitant prices as long as possible. Their powerful lobbies will be working overtime to defeat price reforms. They will probably win in the halls of politics.

That leaves it up to major private payers to get the job done. Some have already moved to direct contracts at fixed, transparent prices. The list includes Walmart, General Motors, Amazon, Berkshire Hathaway and J.P. Morgan Chase. These payers look at quality of care first and then at the all-in price tag.

They have the power to put an end to the chaotic prices that have driven the average cost of health care for a family coverage sky high. According to the Kaiser Family Foundation, a family plan now averages $19,616. The employee share is now $5,547. 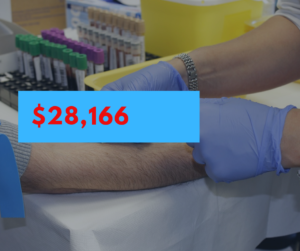 The Milliman Medical Index puts the price tag for a family of four at an astronomical $28,166.

It doesn’t look any better going forward. Inflation in premiums is running at 4% to 6%. In short, the burden on employers and employees will get heavier unless the major payers bring some order to the pricing puzzle.

Medicare has the power to corral prices, but its management is too politicized to fix the broken system. It has made a run at bundled, transparent prices, but has not sustained that initiative. The same is true at the state level for Medicaid coverage for the poor.

The private payers will have to do the job.