Tom and Mary: Death with Dignity

It was a year ago that my brother Tom, 16 months younger and my best buddy, and his wife Mary decided to end their lives together on their terms.

Here is what he wrote to family and friends: 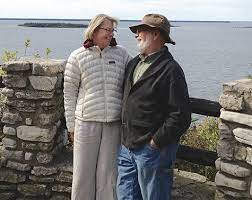 “Faced with ever greater losses of mental capacity and increasing suffering and pain, Mary and I have decided individually and together to end our lives. To go together. As one heart, one soul, one love.

“We hastened our death. By our choice we died gently and peacefully, holding hands lying side-by-side in our bed at home.

“For us, it was a culmination of our 55½ years of love and life together in which we had become one life, one heart, one soul. A grand finale for our lives lived fully together, our cup running over.”

Mary had slipped into deep dementia the summer before. There was no cure.

Brother Tom spent 10 years battling increasingly unbearable rheumatoid arthritis. Tom’s chronic pain in his words “had a cumulative effect, slowly stealing away the zest, passion, and will, desire for life that I had loved in myself and hoped you had known in me.”

He had become heavily dependent on ever heavier doses of opioids to get through the day and night.

They were not complaining. They celebrated their long lives together.

Contrary to Wisconsin law, they decided long ago to assist each other in their departure from life, that they would die with dignity when they neared the end point of their lives. Mary watched her mother and sister spend up to 10 years in institutions with full dementia. It was heartbreaking. They couldn’t take care of themselves and didn’t recognize family members. It was tragic. Mary did not want the same ending and made Tom promise to not institutionalize her.

Tom was a gifted man with two masters degrees in psychology and divinity. He researched every dimension of the end of life, including the spiritual, the legal, the medical, the economics, the outside assistance, and the various painless methods for terminating one’s life.

Theirs was a conscious, deliberate and thoroughly examined decision.

Friends would ask me about their decision. My response was that I was good with it, because they were good with their own decision. Their lives were their property and they had every right to make their final call, just as they had made many other major decisions together throughout their lives.

Shouldn’t every person in Wisconsin have the right to make the same decision?

Bills have been introduced in the Wisconsin assembly and senate to establish that right, but there has been no action to move the bills forward.

Twelve other states have established laws described as a Compassionate Choices Act.

It’s probable that a silent majority in Wisconsin favors such a right for each citizen.

Mary and Tom made allies with people who stood strongly for a culture and a legal structure that would allow persons to choose their own time and way of dying and to get medical and personal assistance as needed.

As Tom wrote, these allies see death with dignity as the next civil right. “We see them as the new suffragettes.”

Please contact me if you have an interest in joining a movement to allow and assist people who choose to die consciously with dignity. It will be a long and uphill battle in Wisconsin for many reasons, but the logic and compassion should win the day over time. It needs to start now.

I miss Tom and Mary every day. I wouldn’t dream of not allowing them to call their own shots in life and death.

This entry was posted in Death with Dignity. Bookmark the permalink.