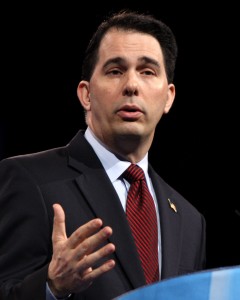 The proposal by the Walker Administration to shift public employees to the health plans of employers in the private sector is petty lame.

Gov. Walker has proposed a $2000-per year incentive to state employees to induce them to opt out of the state’s expensive healthy insurance program.

So, where does he think they are going to go? A few might to a spouse’s plan with local government, raising costs there, but most of those who take the $2000 will transfer to a spouse’s health plan in the private sector. Some of those are non-profit corporations, but most are for-profit businesses. So state health costs will be shifted to businesses.

This is coming from a governor who has declared Wisconsin “open for business.” He has made many other moves to make his state more business friendly. But this maneuver to help balance a tight state budget is not in sync with his general theme.

For openers, about 5% of state employees, or 3300, already opt out and would be eligible for the $2000, so there is an up-front cost of at least $6.6 million. Nonetheless, the short-term arithmetic works for the state. If only about 450 more state employees opt out, at $17,000 per employee in the current state plan, the state gets its incentive money back. But those 450 and their $7.5 million in health costs get shifted to other payers.

This small-ball maneuver points to the administration’s large-ball duck on bloated state health costs. The Employee Trust Fund (ETF), which buys health care for some 62,000 state employees, brings in health costs at about $20,000 for a family plan.

That compares to about $11,000 for best-practice private companies.

The governor’s spokesman called the ETF program “one of the richest health insurance plans in the country.” There’s validity in that statement, but it is a poor choice of words. The word “richest” implies better benefits. But many private plans are as good or better for coverage and offerings – at far less cost.

For instance, many of Wisconsin’s top employers offer free on-site primary care, which the state does not. Many businesses, and a few school districts (West Bend, Elmbrook, Beloit among them) do that because it keeps people healthy and out of expensive hospitals ($5000 to $7000 per day). Proactive primary care saves big money.

The word “richest” should have been “most expensive.” The ETF health plan could also be called “under-managed.”

An ETF spokesman commented that ETF is considering going self-insured. Not a bad idea. Most large private employers have already done that. But let’s be clear. Just going self-insured doesn’t save a lot of money. It’s what comes after going self-insured, such as installing on-site clinics and adopting incentives and disincentives in consumer-driven plans, that improve care and costs. Self-insurance simply enables a payer to keep the huge savings from innovative reforms.

Employees in the ETF plan – after Act 10 — pay at about 13% of plan costs, with the taxpayers getting the bill for 87%. That employee share compares to about a 25% in the private sector.

Bear in mind that the state already does a massive cost shift to business in the way it runs Medicaid. Called BadgerCare, it uses de facto price controls to pay health care providers about 40 cents on the dollar that the private sector pays.

That, in effect, is a hidden tax, because providers make up what they lose on BadgerCare by raising prices to private payers. With one in five Wisconsinites on BadgerCare, this is no small matter. The state spends about $3 billion per year on BadgerCare, and that is matched by another $5 billion from the federal government.

If their controlled prices were at market, about 50% higher, that would be an added $4 billion annually in BadgerCare payments. Consider that the approximate cost shift to business by state and federal government.

Other states, including some with Republican governors, have asked for waivers to apply lessons learned in the private sector for taming the beast of out-of-control health care inflation. They have learned it isn’t enough to just trim who is and who isn’t on the Medicaid rolls.
How can the administration come up with a mini-move to cost shift and not tackle the elephant in the room (pun intended)?

Note that the governor, legislators and their staffs are on the ETF plan, so moving away from that “richest” of plans will prove unpopular to many inside the beltway.