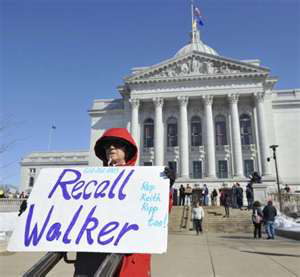 You learn early on in physics courses that for every reaction, there is an equal and opposite reaction. So it seems in politics in Wisconsin these days.

Or from the arena of war and peace, we have learned that unconditional victory can sow the seeds for future wars. Think of the seething resentment in Germany after World War I and the resulting World War II.

Over the last decade, the politics of Wisconsin has been largely characterized by “give no quarter, take no quarter.” That uncompromising approach inevitably leads to the kind of polarized politics that were rampant in the budget-fixing, union-busting collision in the first six months of the Walker Administration.

The Republicans used their majorities in both houses to push through their agenda, much as President Obama did with the national health care bill in Congress. As with physics, there will be powerful reactions to un-do those decisions.

The reality, though, is that laws are hard to reverse. It takes control of the executive branch and both houses of a bicameral legislature. Thus, ObamaCare is going to very difficult to repeal and the union decimation in Wisconsin is likely to stand for at least several election cycles.

The two parties have skewed more left and more right in the new political polarity, and the hard-liners in both parties are convinced of the purity and appeal of their platforms. The reality, though, is that the 40% block of independents in the middle determines political victory.

The independents prefer grown-ups who pay their way.

The big question now becomes: how will the independents come down this summer in the nine recall elections for control of the state senate and in 2012, when legislatures, President Obama and probably Gov. Walker will face the electorate.

It is totally predictable that every union leader in the country will be focused on Wisconsin over the next year and a half. Their reaction to their unmitigated loss of union bargaining power and dues collection will be a desperate effort to recall Walker.

The Walker opponents can’t do that until he has been in office one year, and they will need a half million signatures to petition successfully for a recall. Come January, they will be out in force to get those signatures.

They raised about 100,000 signatures for the recall of six GOP senators, so there is every reason to believe they can raise the 500,000. The passion generated from an unconditional loss will provide the motivation.

The ballot box is a far better way to find a coherent political direction than through the raucous protests at the capitol or from the arcane ins and outs of the legal system.

For instance, the Democratic suit against the collective bargaining law was based on an alleged violation of the open meetings rules. Legal technicalities aside, everyone knew what was in that bill. It had been wide open for weeks, the subject of exhaustive hearings, voluminous press coverage and loud public debate.

As the Democrats mount their counter-offensive, they might want to reflect on what they will do if they win back the senate and/or the governorship. When they and their union supporters were in power, they used that power to push public employee pay and benefits to unsustainable levels. No trend line like that goes on forever.

There are ways to deliver full benefits – think consumer-driven health care – without breaking the government bank. It’s more about managerial science than political science. But they were impervious to change, and the unavoidable rebalancing ensued.

Will the state and national politicians ever rediscover the wisdom and virtue of compromise and collaboration? There was a flicker of compromise when the 13 Democrats were decamped to Illinois, but it was quickly snuffed in the partisan storms.

Had there been any kind of compromise by the two parties, the reaction might not have been as strong as it is going to be for the next 18 months. We will be living in interesting, historically divisive times.

This entry was posted in General Blog, Health Care Economics, Obamacare and Business. Bookmark the permalink.