Disarray in White House not okay

President Trump, who made a TV career out of firing people, is showing that he is very comfortable with firing his people in the White House. Of late, he has terminated at least one a week, like he did on his TV show. 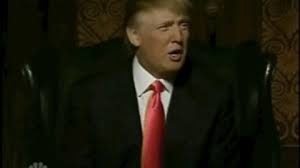 President Trump on the Apprentice

There are huge differences, though, in terminating apprentices on a reality TV show and firing top executives and high-level staff members in the real world. First, these are not apprentices playing a silly game. They are high-level, successful, experienced people who are trying to keep the country out of trouble and on the right path forward. It’s not a game they are playing. Many are there as patriots offering their leadership talents to the country. They are not there for the money.

Secondly, terminations represent a failure, not just on the part of the departing executive, but also on the part of the person who hired them in the first place — or failed to use their strengths. It has become almost a golden rule of business that the first job of a leader is to get the right guys on the bus from the get-go when you take over as chief executive officer.

On TV, the fired “losers” just do a stage left and they are gone. There are no consequences.

Incidentally, firing people is not a heroic act. It’s not hard. For ethical people, the angst comes beforehand in making sure that termination is the right call. The actual act of letting someone go takes five stressful minutes, and it’s done.

Note, though, that most stand-up leaders do the separations face-to-face. They don’t have an underling do the dirty work. They don’t Tweet it before a mano-on-mano message is delivered.

Any organizational expert will tell you that repeated terminations speak of in an organization in disarray. Chaos at the top predictably leads to poor decisions and ineffective execution of objectives.

Anyone who has any experience in management knows that team work is almost the best answer for getting good results. And you can’t build a team when there is a constantly revolving door.

So, when the president glibly says there are no problems on his ever-changing executive team and that there are ten people waiting every open job in the White House, he demonstrates that, while he may be a deal maker, he doesn’t understand what makes for an effective executive.

We all understand that the president is not just an executive; he is also a political leader. Those are two different jobs. As elected political leader, his job is to keep the country moving in major directions that a majority of citizens can agree with or at least live with, without abusing those in the minority. President Trump gets different grades from different camps on that score, some high, some low.

On the chief executive side of presidency, managing a $3.7 trillion federal government, our Oval Office CEO just doesn’t get it.

For openers, the top job requires some humility. If you are the smartest guy in the room, you are surely in big trouble. A great executive knows that a respectful, candid dialogue among smart people ALWAYS results in a better solution to a problem than the singular insights of a genius, real or self-proclaimed genius.

Recall that Trump, the deal-maker Trump, who relied on gut instincts and a small staff, went bankrupt in four companies and ran out of U.S. banks who would lend to him. It’s no big deal for the country at his business level, but major mistakes hurt a lot of people when they happen in the White House.

Look at the arrogant, top-down roll-out of Obamacare as an example. The intentions to increase access were laudable, but It was conceptually and managerially flawed. In the end, many citizens have been priced out of health care.

Or consider the toll from the second Iraq war that started 15 years ago. The latest U.S. casualty count: 4,424 killed and 31,952 wounded, and we are still there. The total death toll including Iraqis is more than 288,000.

When effective CEOs put together their executive teams, they go to great lengths to make sure they have the right mix of personality types, expertise, experience and character. The chosen team members need to have the confidence and latitude to speak their truths, even when they disagree on a given direction.

President Lincoln was famous for managing a team of rivals. He fired non-performing generals, but his top staff stayed mostly intact despite major differences.

President Trump says he likes diversity of views, but those who don’t agree with him often hear his favorite two words: “You’re Fired!”