List of reasons to vote ‘No’ on Trump grows to 72 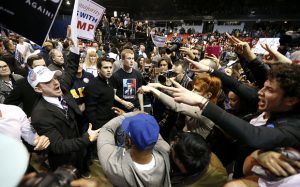 My initial guess on the number of solid reasons to vote against Donald Trump for president of the United States was that it would grow to 50 or so. I underestimated.

The list, accrued from many sources, has grown to 72. My new guess is that it will hit 100 by the November election as he lurches his way toward the Oval Office.

Here are the latest ten additions to an indictment of the man and his campaign. (See my web site for the previous 62 reasons.)

63. He confuses reality and image, vowing: “At some point, I will become so presidential that you people will be so bored.” He thinks you can put lipstick on a pig and fool the world. But we all know that you are who you are. No amount of lipstick can change the core of who he would be as president. He has continued his use of invective and insults since saying he will be presidential. He is not capable of a dignified interchange.

64. He has flip-flopped on the issue of H-1B visas for highly skilled foreign workers, but mostly has flat out opposed them. How does he explain that his Trump Model business has used H-1Bs to bring in foreign models, including his Slovenian wife? He can’t and doesn’t.

65. When things aren’t going his way, as with some of the rules for the GOP convention on at-large delegates, he plays the victim. The establishment, he says, is out to get him. How does a high-flier like him get away with victimhood? It is unbecoming at a minimum.

66. Trump relishes the endorsements of a rogues gallery of sports nut cases, like Bobby Knight, Mike Tyson, John Daly and Dennis Rodman. Would he put these geniuses in his cabinet because they are “tough, really tough”?

67. According to boxing luminary Oscar Da La Hoya after a round together, Trump cheats at golf, big time.

68. Though promising some presidential gravitas, he played fast and loose with the stability of global financial markets when he floated the idea of defaulting on U.S. Treasury bills in a crisis. Those notes are the backbone of the international financial markets. He cited his experience with his bankruptcy debts as his credential. Brilliant.

69. So much for personally financing his campaign so he wouldn’t be beholden to billionaires. He has hired a former Goldman Sacks banker to raise funds for his general election campaign. He had previously excoriated Goldman Sachs.

70. His flip-flps on issues keep growing in number. He once flat-out opposed raising the minimum wage; now he is open to raising it. Who knows where he will come down on that one.

71. Whether he fully intends it or not, his campaign brings out the dark side of the American electorate, including anti-semitism, insults of Mexicans and Muslims and prejudice of all sorts. His support groups are starting to look like a mob. His campaign is getting ever uglier.

72. Terrorists groups are using his anti-Muslim statements for recruiting.

We have more to learn about this charismatic character. Please keep sending me your reasons to send him back to Trump Tower, not the Oval Office. Send them to this blog as a response or to me at jbt01@serigraph.com.