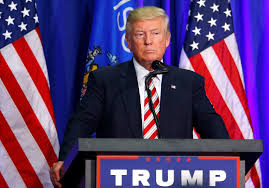 In Washington County, Donald Trump vies for the minority vote

As I listened to Donald Trump launch into his signature speech in his proscriptions for the inner cities of America at the Washington County Fairgrounds Tuesday night, the question ran through my mind: “Does he know where he is?”

He kept saying, “here in Milwaukee” and never once that I recall mentioned West Bend or Washington County. Campaigns are a whirlwind, so the candidate himself can be forgiven for being disoriented.

But what was his staff thinking? He was making a strong pitch for the African American vote in a county that has a very low percentage of minority residents. It’s a speech that should have given during his earlier stops in Milwaukee, the unfortunate locale of recent unrest.

Rep. Glen Grothmann said it was the biggest crowd he had ever seen in Washington County in his two decades in office. Trump’s ability to attract an audience is impressive. He’s the ultimate showman. I would guess the crowd at more than 1000. Some were there to observe the spectacle and history in the making, but most were there to chant “Trump, Trump, Trump” or “USA, USA, USA” and to sport his signs, T-shirts and buttons.

It was a committed crowd. Trump was supposed to speak about 7:30 p.m. But the crowd had to wait for his motorcade to arrive from Milwaukee. They mostly persevered in the sweltering heat inside the packed Ziegler Family Expo Center. Two older men had to be treated when overcome by the high-80s temperatures and the humidity. Trump signs became fans. About 10% of the people left before Trump began to speak just after 9 o’clock.

People wondered why the larger conference center next door wasn’t used and guessed that the Trump managers wanted the appearance of a packed house. It was indeed a full house.

The crowd was orderly, as might be expected in West Bend, which, by the way, does not see itself as a “suburb of Milwaukee,” as so identified by the national and big city press. There was the repeated use of the “Lock Her Up” chant, referring to Hillary Clinton and her e-mail imbroglio. And there were side comments in the audience that were rougher: “She’s the devil” – “Burn that bitch” – “She’s a murderer” – “Hillary sucks.”

Expect a lot more of that kind of stuff, personal attacks, from the Trumpians in the final 90 days of the campaign. His insults worked in the primaries.

There were more men (a good number with tattoos) than women, but the crowd was a mix of young and old, local people, people from elsewhere, Harley riders and people in wheel chairs. What it wasn’t was a racially diverse crowd. As Trump was speaking, I surveyed the audience and saw not one African American.

There were several in the multiple security details and there was one African American women on the scene who I after Trump left. I was told she was a newsperson. So, again, why this audience for this speech?

It was well written, apparently scripted, and he stuck to it all the way through. The style of it seemed out of character, so well spoken, so well delivered, so fluid, so disciplined. We learned later that Trump had sidelined Paul Manafort, the campaign manager who worked to script Trump and make him come off as presidential. The new campaign head will be Stephen Bannon, a right-wing pit bull who likes the unscripted Trump.

With Bannon as his right-hand advisor, expect the gloves to come off big time.

The Tuesday crowd included U.S. Reps Grothman and Sean Duffy, state Reps. Bob Gannon, Dan Knodl, who all spoke on Trump’s behalf. Sen. Duey Stroebel attended, but did not speak. Gov. Walker, who Trump roughed up in the primaries, introduced the GOP nominee and said voters had only two choices: Trump or Clinton. He urged Trump and went after Clinton. But it wasn’t a ringing endorsement. Rep. Jim Sensenbrenner, who represents the county, and U.S. Sen. Ron Johnson were noticeable in their absence, obviously steering clear of any negative drag from Trump’s drop in the polls.

As to substance, Trump’s speech was designed to position him as the law and order candidate in favor or more cops and taking more criminals off the streets. He framed Clinton as anti-police and promised more jobs and a better future for African Americans.

He ranks next to zero in then polls with that segment of voters. Will his speech help? At least he is making the ask.

And while he has a point when he criticizes the Democratic Party about its failure to turn around the jobs picture in the inner cities, it was also good to see a Republican says his party would get involved and do better.

We could use more jobs “here in Washington County,” too.