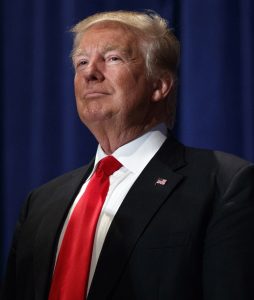 Before I get into more reasons to vote “No” when it comes to Donald Trump, here are a few more insights on his visit to Washington County on August 16.

I estimated the crowd at more than 1,000, but that was way low. Credible sources put the audience at 3700, with people in the line replacing those that left because of the heat index and his late arrival. The turn-out showed his remarkable showman’s charisma. It was the biggest political rally in recent West Bend history.

I learned that his speech on inner city challenges was still being written when his staff arrived ahead of him. That’s surprising, since it was billed as a signature speech to add to his previous major statements on the economy and anti-terrorism. The West Bend speech calling for African American votes was printed off in the fair park offices just before he delivered it at 9:04 p.m.

He has since repeated in other venues the theme of the speech – that African Americans have been short-changed by the Democrats in charge of big cities and therefore they have nothing to lose by going with him.

The reason for putting Trump’s appearance in the smaller of the two convention centers on the fairgrounds: the larger facility was booked for a job fair the next day and was set up for the event. The build-up of heat and humidity inside the packed Ziegler Family Expo Center was partly caused by the refusal of the Secret Service to open large doors to let in cooler evening air.

All in all, it was indeed a big show and it came off without major incident. Congratulations to all involved, especially the security details.

Meanwhile, with 10 weeks to go to election day, separate sources keep coming up with new reasons to vote for someone else. Here are more to add to the 90 already listed on my web site:

91. Trump, a prolific Tweeter, issued no congratulatory tweets – as in zero — to U.S. Olympians who are hauled in record numbers of medals. Their multi-ethnic march to the podiums didn’t fit his narrative that America is crippled and only he can make it great again. His rival, Hillary Clinton, has been effusive about American wins. Several medal winners are children of immigrants, including one wearing a hijab. That didn’t fit his narrative either. In sports, America is still great.

92. He hired a political pit bull as his campaign CEO, one Stephen Bannon, a rabid political operative who has made it his mission to rip up the leadership of the Republican Party. While Trump was making gestures toward healing wounds with the establishment of the GOP, Bannon was backing a challenger to House Speaker Paul Ryan in his home congressional district in Wisconsin. If Trump is sincere about wanting GOP support, why did he make Bannon his third campaign manager right after the West Bend speech? The answer is that he is not sincere on that matter.

93. Trump is doing a major flop, a belly flop, on immigration, his core attack point against Republican challengers in the primaries. Then, he said that all 11 million immigrants, including their American-born children would be forced to leave the country. Thursday (Aug. 25), he said, “You can’t take 11 (million) at one time and say, ‘Boom, you’re gone’.” No one knows where he will end up on this issue, probably not even Trump himself. There is a logical GOP position: give work permits, but not citizenship ever to illegal immigrants, if they have behaved well while here. Give citizenship to kids born here. As Rep. Glenn Grothman of Wisconsin said as Trump flipped and flopped this week: “You have to use some common sense.”

94. None of the 45 economists who have advised the past eight presidents, Republican and Democrat, support Trump. Six of the 17 advisors to Republican presidents oppose Trump outright; the rest have declined to comment. Greg Mankiw, who headed the Council of Economic Advisors under George W. Bush, wrote, “I have Republican friends who think things couldn’t be worse than doubling down under Hillary Clinton. But they are wrong: things could be worse. And I fear they would be under Mr. Trump.”

Keep your reasons to vote “NO” on Trump coming to me at jbt01@serigraqph.com or on my website at johntorinus.com. Number 100 is in sight.