No Boy Scout, so 100 No Trump reasons 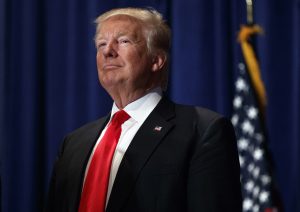 If you liked Donald Trump going into the first presidential debate, you probably thought he won the debate against Hillary Clinton.

If you liked Clinton going in, you surely thought she won.

If you were among the undecided or the depressed voters, you are probably still both.

Months ago, I began listing the reasons to vote “No” on Mr. Trump, because he is the antithesis of every value I learned growing up as a Boy Scout and later a U.S. Marine.

The Boy Scout Law asks boys and men to be “trustworthy, loyal, helpful, friendly, courteous, kind, obedient, cheerful, thrifty, brave, clean and reverent.” The Marine values are honor, courage and commitment to do what is right at the highest level of ethics and integrity. Trump exhibits none of those traits or values.

I know this sounds naïve in Trump’s world of hard-ball deal making, but it is also naïve to think that the country can do well led by a man for who values are irrelevant. Winning, or appearing to win even when you are losing, is all that matters for him. Collateral damage to people in the way matters not.

The “No Trump” reasons have grown to 100 (see my website at Johntorinus.com for the full list). Here are latest three:

98. His Donald Trump Foundation is a personal piggy bank. Money owed to him or his businesses that should have been subject to tax flowed in untaxed; personal payments and political donations flowed out. It was either sloppy or advertent financial management that bordered on the criminal.

99. Grossly under-prepared for the critical debate, he broke all the rules, interrupting and overriding his opponent and moderator repeatedly. His disorderly mind caused him to miss the point of questions. In short, he covers up for an undisciplined mind with bluster, repetition, filibuster and theatrics.

100. He is oblivious to the truth, as his reversal of his birther slur, a five-year slander campaign, demonstrated. He made no apologies for leading that smear campaign. He acted like it never happened. He takes no accountability for the Big Lie. Question: If he can negate completely what he said yesterday, how can you believe what he says today?

There are is still a month to the general election on Nov. 8, so the list of reasons to not vote for the man will undoubtedly grow. They come from many sources. Keep them coming to me at jbt01@serigraph.com. Contrary views are also welcome.