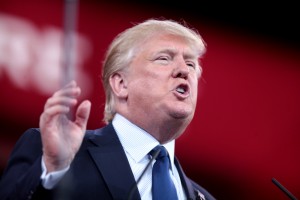 The list of reasons to oppose Donald Trump for the presidency, a collaborative project, grows each day. It now totals 51 solid reasons.

With the Wisconsin presidential primary a week away, and the possibility that Badger State voters might make a difference, I have been offering a collaborative project to come up with 100 reasons why not to vote for Donald Trump as he attempts to follow in the footsteps of Washington, Adams, Jefferson, Monroe, Lincoln, Teddy Roosevelt, Franklin Roosevelt, Truman, Eisenhower and Reagan.

I am getting it going, but please respond with your reasons. I will play editor, as I have done in multiple newsrooms. If valid and non-duplicative, your reasons will be added to the list of why he should be fired as a candidate.

The list is also open to edits (like Wikipedia). Submit proposed edits or additions to me at jbt01@serigraph.com.

This list is open to more reasons from any and all. Respond on this web site or e-mail me at jbt01@serigraph.com.