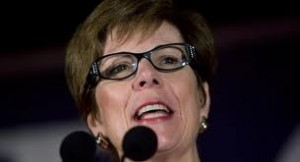 Flash forward to this possible scenario on June 30, 2013, Democrat Kathleen Falk is governor, and she stands by her pledge to union leaders to veto any budget that doesn’t restore collective bargaining for public employees in Wisconsin.

Over in the state assembly, still controlled by Republicans, because they went into the 2012 fall elections with a huge margin, there’s no way they are going to send Gov. Falk a budget with such a restoration.

That state goes into the ultimate gridlock.

Wisconsin would have to operate without a 2013-2015 budget. That’s been done before for several months past the June 30 deadline, but it’s painful. Our state statutes provide for continuance under the previous budget if a new one is not forthcoming.

That means, of course, that existing revenue levels have to suffice until a budget passes. Costs rise, but revenues are static. As a result, agencies, the university, school districts and counties are off balance. They have to set levies and tuition without a complete revenue picture.

In short, it becomes governance chaos.

We’ve become used to that here in the Dairyland State. The political world has become a circus, the citizens the circus audience. We buy the tickets, but have little to say about what happens in the three rings.

The no-budget scenario may never come to pass. Falk has to beat Gov. Walker, and it looks like a dead heat at the moment. But, even if Walker fights off the unions in the recall, it is probable that the Democrats will win back the state senate, where they just need to win one of four seats up for recall to regain the majority.

A change in that house could also ensure governmental paralysis, because a compromise on collective bargaining appears nigh impossible.

The 2013-2015 budget impasse could be held hostage to political divisiveness for a long time.
Gov. Walker and Lt Gov. Kleefisch have just declined a recount of the recall signatures, meaning that they are trying to increase the possibility that the recall vote for the four GOP senators will fall on the same date as the gubernatorial recall balloting. Right now, it looks like an early June recall election for the six of them. The Republican thinking has to be that the four recalled GOP senators stand a better chance of surviving if they can ride the governor’s coat-tails.

The June contest will be the ultimate political donnybrook, a high-stakes national poker game. Both sides will put all their chips on the table, millions of chips, more money from outside the state than from the inside — from corporate givers on the right, anxious to retain the gains from Walker’s first year, union givers on the left, desperate to reverse the Walker attack on their powers and dues flow.

As soon as the din dies down from the recall battles, it will be right back to hyper-politics for the fall presidential and another round of legislative elections.

There are so many scenarios, such as how a Walker win or loss will affect the presidential vote in November. Political junkies find the circus entertaining. Many people I talk to in Wisconsin find the divisiveness discouraging. Others think this an important fight to fight, a set of elections with real meaning for the state and the country.

When it’s over, though, and both parties are battered and bruised, the country and state will need some centrist leaders to guide us from warring camps to some common ground from which to govern.