Some tips for Senator Santa Claus

The sizeable yearend bonuses for union workers at Ford and General Motors represent a far better model for resolving the issue of income inequality in the United States than the government programs proposed by Democrat front runner Bernie Sanders. 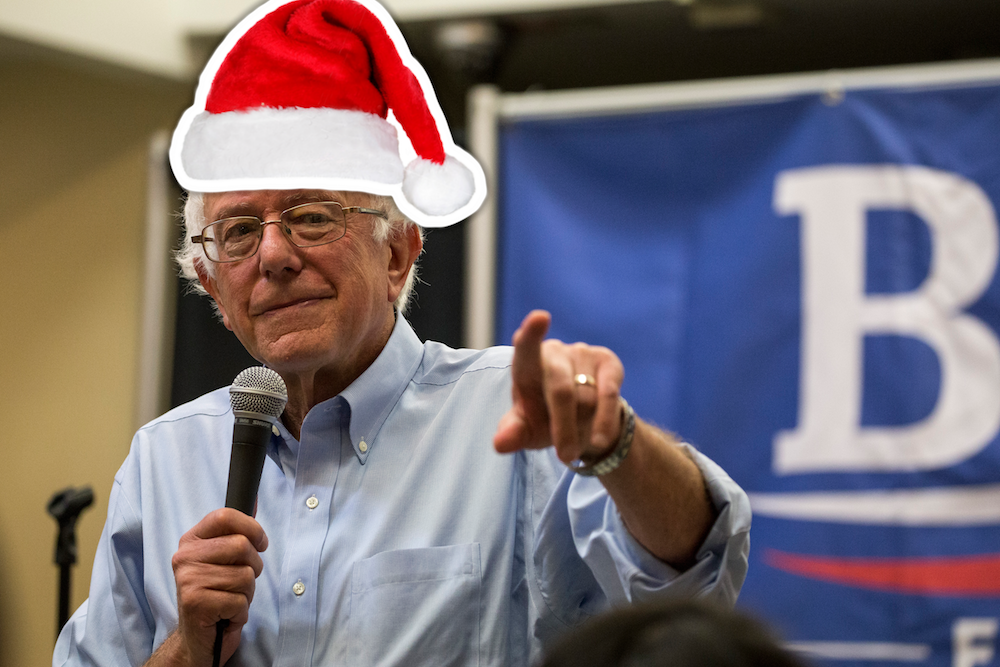 Inequality of incomes and wealth has become the dominant issue of the Democratic presidential primaries. Sen. Santa Claus is pulling Hillary Clinton into one-upping him on offering more freebies to the voters. Republicans will be hard-pressed not to get dragged into their table stakes game come the general elections.

But there are far better answers to the growing inequality than programs managed by armies of bureaucrats.

Record 2015 profits triggered a $9300 check to Ford’s hourly workers and $11,000 for GM’s. White-collar workers got bonuses, too. It’s a profit sharing model that works for all parties, including state and federal government that will get the taxes off those added earnings.
The wage plus bonus arrangement allows the manufacturers to keep base wages in line so they can stay competitive with foreign car makers. Fixed costs are killers in global competition. Variable costs move down in lean years and up in good years like 2015.

With unions fading from the national scene (now only 11% of the workforce), less adversarial ways of splitting the profit pot need to come into play. Profit sharing should be the American way.

Sanders’ posture of anger at the establishment (including Hillary) and benevolence played well in Iowa. A proclaimed socialist, he showed he loves big government, even though the federal debt has risen to $19 trillion, or about 74% of GDP.

It’s projected, without his new programs, to rise to $22 trillion in 2025, or 84% of GDP. That’s scary territory where debt service crowds out many national priorities, including education and defense.

Among other freebies, Sanders would dole out free college tuition and free health care for all. The problem is that “free” ain’t cheap. Point in case: Medicare and Medicaid, both grossly under-managed, are busting federal and state budgets.

Sen. Sanders is purposely mega-fuzzy on the ways and means of paying for his generosity, save for taxing the bejesus out of billionaires. With some serious thought beyond a 1960’s class warfare rant, Sanders could be taken a lot more seriously if he showed more insight about the economic world. Try these thoughts on for size Sen. Sanders:

• Re billionaires: acknowledge that many of them are among our most productive citizens (Gates, Jobs, Buffet, Kohler, Kohl, Hendricks, Johnson, to name a few); acknowledge that many of them have followed the lead of Gates and Buffet in pledging to donate almost all of their fortunes to civic and charitable causes. The latest to do so is Judy Faulkner, founder of Epic Systems in Verona, which now employs 9000 Wisconsinites. Say: “Thanks, Judy.”

• Keep the alternative minimum tax of 28% in place for the big dogs, but move the brackets with inflation so the middle class doesn’t increasingly get nailed by AMT. Consider a higher minimum tax, say 40%, for the really big earners: corporate CEOs, Wall Street traders, Hollywood stars and big league jocks. Kick in the higher rates at, say, $5 million per year. Include unearned income like capital gains and dividends in income subject to AMT.

• Acknowledge, though, that higher taxation on the upper 1%, who already pay a very disproportionate share of total taxes, won’t put much of a dent in the income inequality equation.

• Re paying for universal health care: Start talking about innovative management of population health and health costs. The private sector is leading the way to taming health care inflation. Only with smarter management can we can afford universal care. Note: policies on the Obamacare exchanges are rising 9% on average this year. Note: Your neighboring Vermont bailed on universal care because it could not come close to paying for it.

• Install a corporate flat tax, at say 20%, so large corporations can’t use loopholes to escape taxation. A lower and less complex tax rate (now 35% at the high end) would take away the motivation of multinational corporations to move to low tax countries.

• Follow the Wisconsin lead and give 25% tax credits to investors in qualified new business ventures. Entrepreneurs create most of the new jobs in the country, and good jobs are the best answer to income inequality.

• Expanded loan guarantees for startups, ala the SBA, would accelerate their growth, with bankers not bureaucrats making credit decisions.

• Take the clamps off business lending by community banks; the regulators are smothering them.

• Emphasize the negative income tax – Earned Income Tax Credits – that supplement incomes for people who go back to work. It gets them on track to careers, higher pay and positive tax payments. The EITC supplement doesn’t need legions of government managers to administer. Economists from left and right agree.

• Remind yourself and the voters that the retirement funds for the workers of America own a large majority of the stocks in U.S. corporations. Households own 80% of the equity markets. Most of us are capitalists through our mutual fund holdings and retirement accounts.

The slowly recovering U.S. economy is creating a intense demand for labor, including immigrants, which means a low unemployment rate (below 5%), better household income and, finally, an upward spike on wage levels (up almost 1% in just the last two months).

Above all, a buoyant economy where businesses thrive is the best solution to Sen. Sanders’ burning issue.

Wouldn’t it be a relief to hear a candidate for the Oval Office offer a balanced view of a complex issue like wage inequality and an accompanying strategy that attacks the income gap while bolstering the economy at the same time?

The gifts from Santa Claus aren’t free. Someone pays for them.