Toward 100 reasons to vote ‘No’ on Trump 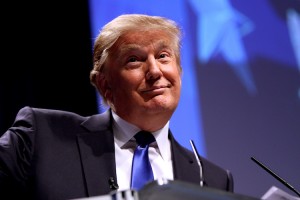 With the Wisconsin presidential primary a month away, and the possibility that Badger State voters might make a difference, I offer a collaborative project to come up with 100 reasons why not to vote for Donald Trump as he attempts to follow in the footsteps of Washington, Adams, Jefferson, Monroe, Lincoln, Teddy Roosevelt, Franklin Roosevelt, Truman, Eisenhower and Reagan.

I will get it going, but please respond with your reasons. I will play editor, as I have done in multiple newsrooms. If valid and non-duplicative, your reasons will be added to the list of why he should be fired as a candidate.

The list is also open to edits (like Wikipedia). This is an iterative process. Submit proposed edits to me at jbt01@serigraph.com.

Here, to get the list going, are some reasons to vote against Mr. Trump:

• He is what psychologists would call a narcissistic sociopathic. Trump believes he alone can “make us great.” We all know that it’s the contributions of individual Americans who make this country great Leaders come and go.

• During the Vietnam War, he got four student deferments, a medical deferment and finally 4F status for heel spurs to avoid the draft. He had gone to a military high school, so he had something to offer the armed services. This not a good track record for someone who aspires to be commander in chief.

• As the old joke goes, he was born on third base, with a million dollars (in today’s dollars) in his jeans on getting out of college, and he thought he hit a triple.

• As an heir later to a huge fortune, he never will be able to relate to the average American. “He doesn’t represent me,” said one early contributor to this list. Narcissists don’t relate to other people unless it serves their purposes. For them, it’s all about “me.”

• His position on health care reform is so vapid that it amounts to gibberish. He is spectacularly uninformed on one of the largest issues facing the United States.

• He has been on many sides of big issues, the ultimate flip-flopper. He doesn’t deny his policy disorders. He says he is “flexible.”

• Ergo, he is loose cannon. We have no idea of what kinds of decisions he would make in the Oval Office.

• He’s got bankers who won’t lend to him again after getting flushed when he went to bankruptcy courts for protection and debt erasure. Would you lend your money to him?

• He likes to sue people or threaten to sue them. Would he use the Department of Justice to go after opponents? Would he send the IRS after them? Per his book, “The Art of the Deal,” he practices deal making by intimidation.

• His business of hotels and casinos adds little value to the American economy. His products are not essential. Casinos are just transfer payments, from losers, often people of meager means, to casino owners.

• He has cratered more businesses than he has led to successes. His losers include an airline; two magazines; a travel booking website; Trump University, which was rated as low as D minus before going out of business; a mortgage company launched with exquisite timing in 2006; a vodka brand; a line of “the world’s greatest steaks” steaks; a condo project in Mexico; and Trump Plaza, a casino and hotel in Atlantic City. In short, his business track record is checkered at best.

• Specializing in personal attacks, he insults and demeans. What if everyone operated like he does?

• He is a divider, not the unifier he says he is. Ask Mexicans and loyal American Muslims.

• Though he obviously communicates well with many people, he has a language deficit and a limited vocabulary. Good speech is a function of clean thinking, and vice versa.

• He obfuscates as he puts out reasons for not making his income tax filings public. If his 2015 return is still being processed by staff, OK. But he could release the 2013 and 2014 returns.

• He is backed by David Duke and the Ku Klux Klan.

• He said praise from Vladimir Putin is a “great honor.”

• His combination of proposed tax cuts and spending programs would sharply increase the federal debt by $12 trillion to $15 trillion over a decade (It’s now $18 trillion.). Though Wharton educated, he has trouble with ways and means, with solving fiscal equations.

This is just a start toward 100 reasons to fire Trump as a candidate for the presidency. There may be many more than 100.
Please join me in compiling the full list.