It should come as no surprise that President Donald Trump is in outright warfare with the leaders of the Republican Party. He never was a real Republican.

Way back in 2016 when he was running in the primaries, I wrote as reason to not vote for him in the GOP primary:

In short, Donald Trump always was and always will be undefined. He is a man of the moment. He is reactive rather than proactive. He knows what he is against — much of what his predecessors put in place. He rescinds; he doesn’t originate. He is a maverick. He is unaligned. He has no loyalties to a creed, a philosophy or the people around him who stand for a consistent point of view. He is a political entrepreneur, always ready for the next political pivot. 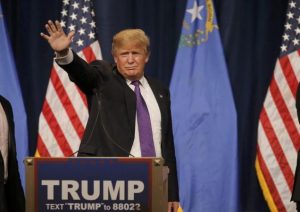 So what else to make of him?

Some pundits are labeling him as an independent. That doesn’t work for me. Most independents I know have abiding mix of positions; their views just don’t line up with either of the two parties. Typical is a citizen who is fiscally conservative but flexible on social issues.

To label Trump an independent misses the essence of the man. In reality, no political labels apply,

Foremost, he is an entertainer. He relies on new chapters in his soap opera to hold his audience. That explains his regular use of the line — “You’re fired!” — to members of his White House staff.

Among the casualties was Reince Priebus, former head of the Wisconsin and national Republican Party. This is the guy who gave candidate Trump the ground game to win the general election. Priebus is an operative, but he believed in what the GOP was selling. If you fire the former head the party as chief of staff, are you a Republican?

Trump has made it clear in recent weeks that he would love to fire just about all the Republican leaders in Congress (Speaker Ryan, Sens. McConnell, McCain, Corker, Graham, Flake). But he is slowly learning that they don’t report to him; they report to their constituents.

Unlike despots in other countries, he can’t fire them. With great foresight, our founders built in checks and balances, so the legislature and judiciary are independent of the White House. That separation of powers must be very frustrating for a president like Trump, who likes to govern by executive order.

On the entertainment front, the president obsesses about the journalists he professes to despise. Their coverage is catnip for him. Most leaders have a mission in mind and forge ahead with their agendas regardless of the critics in the cheap seats. This guy cares more about the commentary than the substance.

He is into ratings, polls and crowd sizes at his unending campaign events. (Note to Mr. Trump: the campaign is over). He did with as a TV personality in the ratings. What he doesn’t get is that ratings assess what people watch, not what they think about your effectiveness. Entertainment is a diversion from life, not real life.

He invariably sees his crowds as bigger than they really were and opposing groups as small than they were.

I wake up every morning and close every day wondering what surprise the President riffed off the night before or during the work day. The Tweets are always there. Fascinating to watch, but disheartening on the serious side of life. But I am sure his TV ratings remain high, which explains in part why he gets so much coverage.

At the same time, his polling numbers continue to fall in large swaths of the electorate. The polls measure not his showmanship, but his presidential performance.
On those metrics, this man who claims to be a winner is a proving to be a loser. In a recent poll, he was at exceptionally low in approval ratings with women (23%), college grads (24%) and votes under 45 (29%).

Even chunks of his “base” are eroding, such as men (41%), voters over 45 (37%) and whites without college degrees (38%). That’s the group that will stick the longest with Trump. They show up at his rallies. They will deny the erosion, claiming a not-so-silent majority still exists. But his fall from grace is not fake news.

It seems like Donald Trump has been in office for a decade. Like him or not, he generates sensory overload, even when he is on vacation.

Meanwhile, all of us who are along for the ride should give up trying to label him. He defies any brand.

As for the Republican Party, it’s going to have to figure out how to unwind a bad marriage.