Other states are responding to the raging forest fire of Coronavirus infections, hospitalizations and deaths by increasing restrictive measures, such as curfews after 10 p.m., complete shutdowns of indoor hospitality spaces like bars, restaurants and movie theaters.

Meanwhile, in Wisconsin Republicans have taken Gov. Evers to the state Supreme Court over his statewide mask mandate for indoor spaces. There does appear to be more adherence to his mask requirements, mainly because many retailers, including the big ones, require masks inside their stores.

There are still many Wisconsinites who refuse to wear masks, even though almost every doctor in the country believes that masks help to stem the COVID spread.

The lack of consistency on mask compliance reflects the political division in the state on how seriously to take the pandemic. If we can’t find consensus on something as simple as masks, imagine the battles ahead on curfews and renewed shutdowns if they are called for.

There is a distinct possibility that more drastic measures will be needed. The number of new cases has tripled from September’s averages to November’s. They are up nine-fold since Sept. 1.

Deaths have leaped from ten per day in September to 46 in November. As a result of the patient pressure, hospitals in some parts of the state can’t take more patients.

Wisconsin’s numbers are the fourth worst in the country on a per capita basis. That is a very sorry track record. President Trump’s dismissiveness of the pandemic figures into the disastrous numbers, but we can’t blame him for Wisconsin’s worse numbers. That’s on us.

What we have here is a failure of leadership from the state level on down.  What to do in the face of a very deep crisis? Our two legislative leaders, Assembly Speaker Robin Vos and Senate Majority leader Devin LeMahieu just have to get together with Evers and come up with a plan.

They could mutually name a COVID czar and a bipartisan task force of disease experts to support him. It should shape the plan. 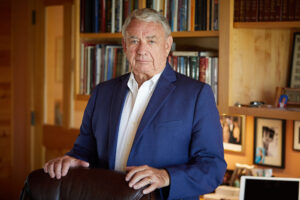 Parts of a statewide plan are already falling into place. Former Gov. Tommy Thompson, interim president of the University Wisconsin System, has broken through some barriers to launch widespread treatment. He is obtained 150,000 test and has all 26 campuses in the UW System now engaged in broad scale testing of students, faculty, staff, and the general population.

Prior to the rollout of the promising new vaccine, we know what to do to contain the spread of the virus. It’s not that complicated. We need to test, test, test, and then trace, trace, trace, trace. Then rigorously send the positive cases into quarantine until they are safe.

This is not high-level science. It is a matter of leadership, logistics, execution and accountability. The metrics, which are terrible now should be out front, loud and clear.

The rest of the plan to be developed has to involve elements like the nursing and doctor shortage, distribution of the vaccines when they become available, and guidelines for businesses that have to stay operating for the sake of the economy.

Once agreed to by our leaders, the people of this state simply must get behind them and their plan. Let’s have no more partisan wrangling or constitutional posturing. (The 2020 elections are over.)

Other states have done it. With the help of their universities, other states, like Illinois and Massachusetts, have most of their plans in place. Why not us?