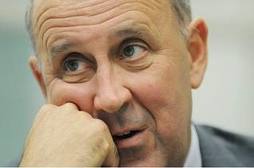 Noticeable by his absence in the Madison uproar is former Gov. Jim Doyle. I haven’t seen a single comment from the two-term governor, a longtime friend of the unions. He, of course, knows he is part of the genesis of the conflagration. The budget deficit he handed over to Gov. Walker constitutes major financial crisis. It requires drastic action, much like turning around a failed corporation. In the corporate world, Wisconsin would be in Chapter 11 reorganization under the bankruptcy laws. Arguably, the fiscal hemorrhage crisis could have been solved without the full assault on union power. But most of the costs of government are people costs, so there was no way Walker could duck the benefits issue or the matter of government efficiency. Will Doyle speak up on the side of compromise, or will he do what former Sen. Russ Feingold has done, weigh in in the most partisan manner?

This entry was posted in Business and Government, Uncategorized. Bookmark the permalink.