After seven to eight years of watching almost helplessly as little brown bats careened toward extinction, Andy Hanks has newfound reason for optimism.

Hanks comes from a family of bat gurus. He is in the pest control business in Door County, but his specialty is bats. He could be described as a bat excluder, protector and advocate. As with his grandfather and father, he has spent a big part of his life trying to establish friendly, common ground between bats and humans. 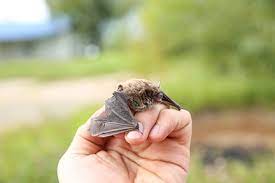 My family enlisted his help because we had bats inside our 85-year old cottage. They spooked some of our guests.

Nobody wants them in their homes, but people who understand that bats are our friends don’t want to evict them by killing them.

Bats are valuable friends. They play an essential role in pest control, pollinating plants and dispersing seeds. They eat as much as their body weight in insects like mosquitoes every night – up to thousands of insect pests.

With that knowledge, Hanks became alarmed about ten years ago when he stopped seeing night time parades of bats going and coming from feeding expeditions. Wind turbines have contributed to their demise, as has the white nose syndrome, a fungus that was invading bat winter hibernating habitat, like caves. They were wiping out huge numbers of the bat population across the U. S.

There are two large wintering caves, known as hibernacula, in Wisconsin, one in Dodge County and the other near La Crosse.

Much of environmental news is of the negative variety, so Hanks made my day when he said that he had been seeing more flying colonies in the last two years. He doesn’t know the reason for the rebound, but he’s happy whatever the reason.

Meanwhile, he, the Wisconsin DNR and bat friends are evangelizing about what individuals can do to help the bats survive.

His grandfather, Marshall Hanks, an engineer, had invented the first bat “excluder.” They are one-way devices that allow bats to leave a building but prevent reentry. The bats find new places to roost. He didn’t patent his initial devices, because he wanted them commonly used.

Older methods such as poison and fumigation never worked, because the openings in the structures encouraged new invaders. The method used by Hanks and other enlightened bat control companies plug all the holes, so once gone, there is no reentry. Also, there are no dead bat bodies left to decay in residences.

It took Andy about three to four hours to find and seal all the holes in our barn-like cottage. The bill was $750, and everyone is happy.

State law prohibits tampering with bats from June 1 to August 15, the period when the bat mothers give birth, rear their pups and nurse them until they can fly.

Hanks puts an ethical dimension to his process; it is “inhumane” to kill them unnecessarily.

We will be putting bat houses on our property to provide homes for the excluded creatures. We would not want them to be among the homeless.