There are some fishy things about the resume of Rep. Timothy Ramthun, a Republican from Kewaskum who has announced a campaign for governor. 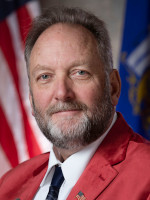 Ramthun is riding a wave inside the Republican Party by creating and promoting an evidence-light allegation that the 2020 presidential election in Wisconsin should be discredited because of fraudulent ballots. He introduced legislation to decertify the 10 Wisconsin electoral college votes in favor of President Biden who won Wisconsin by more than 20,000 votes.

Sensible minds in the GOP leadership made sure that Ramthun’s legislation went nowhere. Assembly Speaker Robin Vos stripped Ramthun of his only staff person. That prompted Ramthun to be a leader in an attempt to force Vos’s resignation as Speaker.

In short, he has been a wrecking ball of reliable electoral processes in Wisconsin. He has undermined the leadership of the GOP.

He has also been a disruptive member of the Kewaskum School Board. He served two years as president before he was voted off the board. He was censured twice for violations of schoolboard policy.

So who is this masked man? He has become the darling of the conspiracy wing of the state’s GOP that has been infected by the conspiracy theories of former President Donald Trump who cannot accept that he was a big loser in the 2020 election.

Ramthun’s resume includes a number of diplomas and certificates in the IT area from for-profit schools. His work history includes a string of consulting stints.

He purports under one bullet point to have been a “vice president and director for multiple Fortune 100 and Fortune 500 companies.” That claim is highly unlikely. Major corporations contract with consultants that have only people with the highest levels of education – degrees, not certificates.

That part of his resume is highly suspect. He did not respond to my requests by email and a phone call to clarify that claim.

Meanwhile, former Gov. Tommy Thompson has floated a trial balloon that he might be interested in a fifth term as governor. He is an octogenarian who is taking an Alpine ski trip to rest from his recent stint as UW System interim president.

Thompson showed he still has plenty of gas in his 80-year old tank as he restored confidence in the university during the Covid crisis and declining enrollments.

In contrast to Ramthun, he has a sterling resume a mile long. Tommy said he would take the month of April to decide on running or not. The state would be well-served to have his solid policy credentials back in the mix. He likes to move the ball down the field, not just win the election.

The Republican Party needs to move past its chicken-shit campaign to reform election processes that are at the heart of Trump’s obsession to overturn the election. For example, the use of ballot boxes is not an overwhelming issue for the state. Labor shortages and Covid protocols are the kinds of major issues that the GOP should focus on. So is crime in our major cities.

We need serious people running our government, not opportunists who are looking for the spotlight and campaign cash.

This entry was posted in Ballot Integrity, Partisan Politics, Wisconsin Race for Governor 2022. Bookmark the permalink.